I know that if you are like me, you are probably sick of hearing about my hijinks and exploits of the Poet Laureate life. Sick of all the wonderful appearances I have been party to, sick of hearing me say I rocked them on the Plaza for the Fourth of July pancake breakfast, sick of my excuse that I have five planets in Leo which I translate as five planets in Ego. I am sick of myself, usually and on a daily basis, but I am also rejoicing. Who is this energetic woman who has now been mistaken for a man not once but twice in a week? Who is this poet who sometimes goes on stage with her skirt tucked in her undies (wear good ones)? And why isn't she sending work off the major literary magazines? Is it because she is still trying to coax a bloom out of her flowers who have pretty much all given up, except the morning glories? Is it because she is in mourning for the fires that burned the canyons and now the black ash in the Rios which the fish can't survive? How can she think life is a joy and a poem when all of this has just transpired her neighboring watersheds? 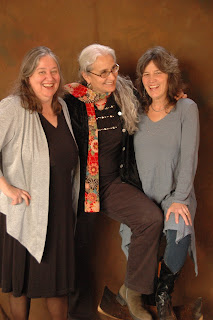 I think I got some of my questions answered this week. My friends and co-conspirators at Tres Chicas Books went to the big city, Albuquerque, for a radio interview on WOmen's Focus and a reading at Acequia books the following day. I think you can hear the interview with Carol Boss, July 23 at noon for two weeks on KUNM.org. Check it out. But even better, check out friendship.

It is truly amazing. I have two friends, Renée Gregorio and Mirian Sagan, who feature an excellent driver with night vision, and women who are as free with money at restaurants and clothing stores as I am. Both of these qualities are great, but not as amazing as friends who listen to all of my plaints and worries, love me anyhow, and give me advice and perspectives. They have even come to realize that I am almost always right. Que milagro! We had a blast and laughed non stop. I had to come home and recover from laughter. I highly recommend finding friends to support your art, publish your work, and run off to a big city with at least once a year. Friends bring joy and endorphins, I know it. Hint: it's good to have younger friends. Not to be ageist.

For one weekend I needed to forget about the US Budget which is ridiculous and any of us could solve in a heartbeat if not for greed. Do you know that greed causes the same bio chemistry as addiction? Do you hear one single gazillionaire say, "Let's experiment with altruism. Let's share. Let's just kick some green ass with our financial clout? Let's end a few wars, divvy up the profits, look at taxes as a privilege of our success." You blog readers know by now that I am an altruistic Scrabble player, and I am watching my husband, who is an altruistic carpenter, and has helped about five people move this month. This includes storing or adopting various things, from a full sized loom to two miniature horses. We have wandering Jews and two Crown of Thorns (altruistic and ecumenical), aloe vera galore, bougainvillea, A combo wine rack.plant stand, a large painting of a woman with two sabertooth tigers which takes up our entire guest room, a Maori mask which hangs over the TV and makes the news look cheerful by contrast, and a Norfolk Island pine which obviously never heard about what happened to our last two Norfolk Island pines.

Anyhow, I hope my second and finale year as Poet Laureate, not to keep dwelling on how cool and groovy it is, I hope this year is of use to people, that we get gentle rains, that my poetry isn't all way too occasional and derivative, and that we are still friends at the end. I have over 500 Facebook Friends, but they have never driven at night with me or heard my stories more than five times. This is the week of my 40th Anniversary. I think our marriage has a fair amount of altruism, screw Ayn Rand. I hope living a life in poetry has purpose and increases endorphins. Viva la PL, even if it happens to be, just briefly and fleetingly, me.

And finally, we have ten days guys for the budget, get it ungreedily unstuck, get it TOGETHER!! 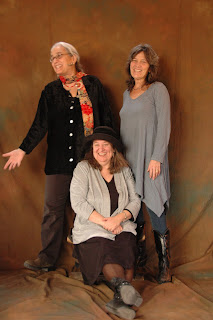