Locked out at the Lake

Margo and I took a few hours from my last day teaching a course at Ghost Ranch called An Unedited Heart:Poetry Alchemy to get a dip in Abiquiu Lake. We had dunked two days earlier and it was heaven, chilly but a layer of sun-warmed water on top. I had a little inkling on the way over that it might not be a good idea, my last afternoon at class, but I am always a pessimist and was trying to be more fun loving and carefree. The lake was only about 15 minutes from The Ranch.

We both returned cell phone calls because we had reception, got out of the car at the old dock, and I was walking around to get my keys off the front seat when I heard a click. The door lock. We were outside in only swims suits and flip flops, and the keys and cellphones were in a tightly closed up car. I checked and rechecked, and then I just started laughing.A bathing suit and towel are scant security against the elements.


There was one couple by the shore and Margo said to them,"Hello. We are just about to ruin your afternoon." Rick and Lisa were sweet about it and Rick would find us a security guard. Last time we were there they were down in a minute on a woman in our class with a Sarsaparilla in case it was beer which is not okay. This time there was nary a park ranger in sight, so I asked Rock for his cell. He'd never own a cell, he proudly informed us. I was still pretty gone with laughter.

I saw some people off in the distance at the new dock, a distance I would not have wanted to trek in flip flops, not to mention my bathing suit. It looked like two couples, I was sure they'd have a phone. When I got out of the car i heard, "Joan, is that you?" That's what I like about New Mexico, It was Fatima and Taslim, the daughters of Rabia and Benyamin, another young woman named Nada, and a fourth with a bad cold. Three of them knew my daughter, Hope, from high school. They had a cell, they offed us cupcakes, and we sent RIck off with thanks. To complete the scene you have to know that Taslim and Fatima are Muslim and wear hijab. I am Jewish and 64 are wear not much. Margo close enough. We called the Ranch to get my husband and his blacksmith teacher, Renée Zamora. I am still pretty gone with laughter and we sit on the dock, a bit awkward. I had the sense that the young women were ready to go, but they were very kind and said they'd drive us back if need be. I asked them if they knew I was POet Laureate, and they said yes. I thought maybe it would help. I rarely play the Poet Laureate card, and here at the lake in almost nothing, it was a wasted card to play. Margo said, "Would you take our picture?" I said, "We don't mean to impose on you." The tone here was all laughter and water, and here is the snapshot, e-mailed to us right there. 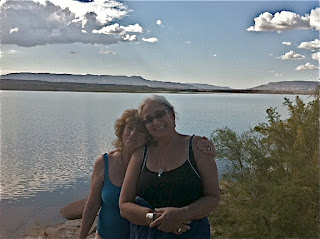 Now here comes the park rangers, we say goodbye and hug. They drive us to my car, tell us it happens a lot, and the two of them can't get into it, i's so tightly closed. I hear the familiar honking of a noisy guy over the steep hill and I know it's Michael and Renée.
The four of them take their time, give up, and then get in. We whoop and thank, and as soon as we can jump into the lake. It's much colder than before, the foot of warm water on the surface from the sun is not present today. I am glad we didn't submerge before our adventure. I have laughed so hard I have a hoarse throat and when we get back to my class who are all milling around, I have to tell them I am too far gone to do a thing.

I tell the story over and over. I am the one who thinks it is the funniest. Margo and I, already friends, are even more bonded by laughter. Does this mean I have become more fun loving and carefree? I don't think so. It took ten people to rescue us, thanks to all you angels. I thought Nada, who had the cell would scorn my silliness, but she asked to be my Facebook Friend.
I friended Nada, the least I could do for all the kindness we received.
at 12:11 PM