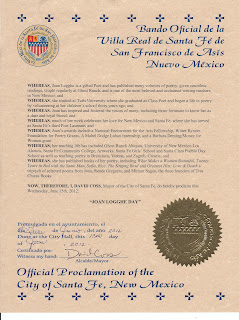 So the mayor proclaimed June 13, 2012 as Joan Logghe Day in Santa Fe.  It was my last hurrah. I was touched, I was teary, I was clumsy.  I read the city council a poem for children that I wrote. Tom Leech from the Palace of the Governor's Press was there and we distributed copies oft he book he published on letterpress  from last year's poem to the city council.  It is called "April in Santa."

It was late in the day. I said to myself, as the day was waning, come back, come back Joan Logghe Day.  I was weepy as we went to dinner, almost staggering to ISME cause it was closest and oddly, sushi has become comfort food.  Michael told the waitperson that it was my day and that's why I was sniffling.
After we ate the young man asked why it was my day and I said I was just ending a two year stint as the city poet laureate.  He got a look on his face and I asked if maybe I had come to his school. He nodded his head.  He attended Agua Fria, Alameda, and last year graduated from Santa Fe High.  I was his graduation speaker and he said, yes, he remembered.  His name is Juan. I told him that when I shook the 306 hands at graduation I tried to make a prayer or blessing for each one.  He is a handsome, courteous guy and I thought, see, there is a post-PL life and it is in community. 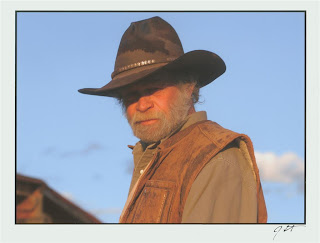 My first act post-PL was writing an obituary for my neighbor, Gary Eckard. Michael and I met Gary in 1973 when he was building a geodesic dome where he lived with his first wife, where we had belly dance parties, music he played, and were awed by the views of the badlands. He sold us six acres of land in 1976, the place we have lived ever since on the road named Eckards Way, though Gary wanted Dead Thief Lane when the county invited us to name the rural roads.  The obit took two days to write.  I made the wise move to ask a few writer friends their memories of Gary and excellent rewrites were coming in, even as the notice was posted.  Now I am sad I don't live on Dead Thief Lane.

Sad as this was, it gave Monique and me comfort, we had a project, and we shared some laughs.
All during his last days I have been writing song lyrics,  feeding the four horses and Kafka, the dog, and the cat whose name I never got.  Five or six weeks and it's just been "Kitty."

The walking over to feed the animals has been a very meditative thing, and just as Monique is missing, among every other thing, the long drive to the VA Hospital down by the airport, the lack of daily practice of morning feeding feels a bit of a loss.  But the real loss is Gary who lived his musical life here, next door, with a singing voice we all adored, a funky piano style we danced to in the 1970's and were devoted fans wherever he played. That's also why I was weepy in ISME, over my sushi.  Here's one of the songs. Anybody got a tune?
Election Day and Venus transits the Sun

with thanks to Miriam Sagan

Always vote for Venus,
This ain’t our first rodeo.
little boy at the Ranchitos pool
his mother calling, Romeo Romeo
Sponge Bob bathing suit
Never has the blues looked so cute.
Tell him, Romeo and Venus
will grow up to elope

Election day and this ain’t
our first rodeo.  Our friend at the polls
had 48 weeks of chemo.
The other one lost his hair in a girlie show
Always vote for Venus, you know
it aint our first rodeo.

Everyone’s dying, or else their wrinkles glow
Living below this factory for Pluto
was just where my life lined flowed.
I’m a fool pessimist and an optimist
lying low.  And forget about context
this ain’t our first rodeo.

My neighbor lingers in palliative care.
Three hippies at the ball game shared
the one wheelchair.  My friend in chemo
still has all of his hair.
This may give him a third chance
I’d follow him to any dance
You know the ballot’s cast for Venus
and this ain’t our last rodeo.

The harmonica and the Jemez are on fire.
The television shows are spitting out liars.
The radio has its Singing Wire.
Fire in the Gila, Tears can put it out
cause this ain’t our first Romeo.

Vote for Venus, cast your glance at fate.
The two of them out on an awkward first date.
Romeo and Venus dance on the blade of a knife.
You’re in the ICU fighting for your life.
Walk on the wild side cause this ain’t our first rodeo.

It’s your movie so you get to dress for the role.
Handlebar mustache on every cowboy you know.
Living on Dead Thief Road, trespassers will implode
cause we’re living for Venus and this aint our first rodeo.
Yes, we’re voting for Venus and it ain’t our last --Romeo.
at 7:48 AM