Blog of my heart

I am two weeks behind.   I am not cut out for this pressure.
Speaking of pressure, Mike seemed to fix the water which was turned off at the source, our well and pump. 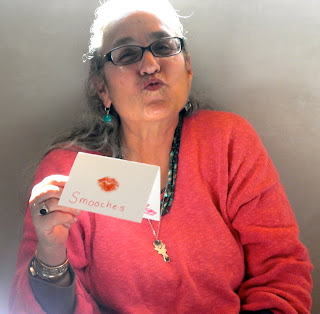 I am not convinced it is fixed, something about red roots.  But I digress.

The red roots I meant to talk about two weeks ago was the second annual Valentine's Drive-By-Love-In.
Poeple met at Marguerites two Saturdays, made 300 amazing Valentines, ate soup, and read love poems from India aloud. The second Saturday I had a no-drive day when my friend Tobie, famously here on sabbatical, came out to La Puebla with high end Whole Foods soup and we made Valentines all afternoon.

Marguerite set the stage by contacting four area retirement/care/elder facilities.  Whenever I don't know the correct term I throw a lot of words at it.  Marguerite and her  friend Katrina came  up with this idea and I am but a humble servant of its genius and love. Marguerite called each place and we had times on V- Day at Rosemont, Sierra Vista, El Castillo, and Ponce de Leon in that order.  I obsessed about how many Hershey's kisses was the correct amount.  This is in honor of my mother, who didn't obsess, but who handed out kisses at the Jewish Home for the Aged where she went to flirt, dance, and generally cheer up old folks who were younger that she.  At her memorial my niece brought kisses. Love always reminds me of my mother, also aging women, also beauty.  She would be so into this project.

We met at Dulce, my latest cupcake nook, and began handing out Valentines on the spot, especially to the woman whose peaceful morning we infringed on by meeting at her table.  Our first visit was  Rosemont. Tobie drove, which I knew meant for adventure.  Marguerite navigated and whenever she said turn right, my back seat GPS navigator Garmin mind was yelling, "Left left," but not out loud.  This is the difference between friendship and marriage. 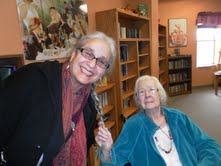 We made it there and unloaded our Kisses and card laden car and noticed on our way in that a priest with a guitar strode in quickly to get ahead of us.  Also, there was a school bus in the parking lot.  These were not good signs for our red clad, eight deep, Valentine toting crew.  I'll cut to the chase.  Last year we had a perfectly fine cast to sing our songs, read our poem, and dispense our holiday cheer to, and this year we had two and a half if you count the woman in the elevator. But of course it was made up in quality.  I fell totally for Virginia Stowall who is 102.  She lived in Los Alamos for 60 years.  So much for my fears of radioactivity. Downwind isn't enough. I should move there.  She was showing me how to make a necklace of buttons and had many more marbles than I do on most days.  There was a man in a wheelchair and said elevator lady who said she never had received a Valentine in her life and bestowed many deeply religious blessings on us. We also got to mix it up with the students from the charter school for the Arts and Technology and hear a song from Pippin, a musical I've never seen or heard.

Our next stop was Sierra Vista where my friend Gary Mex Glazner does many an Alzheimer Poetry Project visit and they are primed for poetry.  We got to sing a little, and "A Bushel and a Peck" was another homage to my mom, the famous Beti with an "i."  It was one of their songs too, a client about twenty years younger than I pointed out. Alzheimer's is that way.  There was also a new resident who was active in poetry in San Francisco, a real soul mate.  So, it went very well there and we met for lunch at Real Food Nation, which is just like it sounds, I mean you can order Buffalo or Portobello.
The best part was that Sabrina Pratt and Julie Bystrom from Santa Fe Arts Commission who were my Poet Laureate pals showed up for a real Valentine's surprise.   Plus my daughter, Hope, who joined us last year as well.  We spread Kisses and Valentines to all and hit the road, two facilities to go.

I know you probably have a life so let me just say we turned left and should have turned right.  They were at nap-time at El Castillo, so Tobie zoomed us over to Ponce de Leon with a promise to return to El Castillo aprés-nap.  Tobie liked the looks of El Castillo and was contemplating signing up for a room, but she hadn't met her Valentine yet.  At Ponce de Leon there were three women at the piano doing sing along.  We had a time slot, but we just had to wait it out, baskets of hot throbbing Valentines in hand and Hershey's Kisses, both dark and light and Hugs, melting in out pockets.  Tobie tried to give a man a card and he wanted to throw away what he called this piece of paper.  She explained it was for him and he couldn't quite get it in his pocket, so she helped him.  At which point he asked for her phone number and assured us his wife was dead, either a few months or years.  After we sang along with the three women who had matching Valentine's scarves, each tied in a different style, it was my turn to go.  I read them poems, we sang our hit, A Bushel and a Peck, and distributed cards.  I give my performance 2 and 1/2 chiles (that's out of four chiles as anyone who reads our local papers knows). One sweet moment was Helga speaking Portuguese to one of the residents she knew. 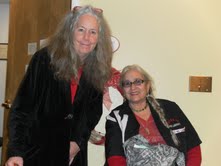 Marguerite and Joan
Marguerite asked me to read Stein again, and I did and I swear it had so much more feeling and depth.
I always got Gertrude, but I super got Gertrude by the end of this adventurous and love filled day.
There were four outstanding people at El Castillo. One was the wife of a man who'd had a stroke. Again, young looking, and she just stood by her man radiating love.  She told me he liked to write.
There was another guy who, when I asked if anyone had memorized a poem, recited a bit of Kubla Kahn to us and said he had memorized the entire poem.  There was the woman who I danced with Fourth of July on the Plaza and who sent me her family history. And, there was Marvin, who kept telling me he was very old and when I flatter-guessed 83 said, "No, 104!" 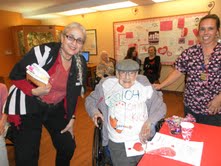 When I was incredulous he showed me his tee-shirt.  It was made by students from Santa Fe Prep for him.  But here's the kicker.  Where was he from?  Los Alamos.   I am definitely moving. 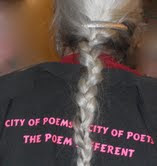