Two Posts in One day.

O frabjous day! Callooh! Callay! somebody once said.  Maybe he was talking about today.


We had a great meeting with Sunstone Press and they are indeed going to publish Odes & Offerings, the book of both poems and images from the visuals artists.  Rod Lambert is on board and Sabrina Pratt from the Community Gallery and Santa Fe Arts Commission respectively. I am sort of jazzed and totally happy that the artists and poets will get a little longevity through print.   And you know, I am a bookish girl thanks to my late mother, the famous Beti, where it all began with Dr. Seuss and Robert Louis Stevenson.   Beti would be thrilled that my education led to something, besides raising chickens and veggies,  and becoming a grandmother, though she was called GG by her one "Great" as they call the third generation.


Then I was on Honey Harris' show.  She is delightful, I never met her before.  I was so psyched about getting there on time that I never mentioned the book.  But I did pretty well for seven minutes.
Here it is:http://www.santafe.com/podcasts/listen/honey-visits-with-santa-fe-poet-laureate-joan-logghe

Then I rushed back to the Palace Press and got a knock out poster for the reading,
JUST WORDS AWAY, with Valerie Martinez and Arthus Sze on April 27, Friday at 6:00 at the auditorium of the New Mexico History Museum.


THEN... I went to the gallery and ran into Jessie White and had a good chat.  She liked the show very much and so will you. Artist Kuzana Ogg's friends Stephanie and Margaret were there and very lovely.  I want to just move a futon there and live in the gallery, but I fear that is a bit extreme.


Then I got invited to be the speaker for the Nava Elementary sixth grade "continuance."
I have never been invited to a continuance before and accepted with great solemnity.
I feel so touched by this.


See what I mean about when things are finishing up.  It's perfectly ecstatic. And WS Merwin tonight at the Lannan Foundation.  Do you think after meeting him last year I can call him WS?


May I repeat myself again---


O frabjous day! Callooh! Callay!
("Jabberwocky," just in case you didn't have Beti to read to you as a child.)

But who is Counting? I am.

One month and twenty days left as PL.  Now everybody is asking me what will I do afterwards.
Sometimes I make a joke, "You mean Post Poet Laureate Stress Syndrome?" It's a joke nobody finds funny, so of bad taste I guess.  Sometimes I know I have been doing this same work for thirty years and it won't be exactly a shock.  Sometimes I am feeling I can't wait for peace and quiet to rear up again. And sometimes I think, who knows, the creative life has its mystery.

But in the meantime I have been full tilt, non-stop, having a blast spreading the poetic joy. If I never hear the words April Is Poetry Month again, it's okay.  Today I have to drive in and out of Santa Fe twice, early and late for all the right reasons, a possible book, a radio appearance which is an oxymoron, and hearing WS Merwin who I got to intro exactly a year ago at the Egyptian Theater in Boise.  He doesn't use punctuation when we writes poetry and he doesn't use capital letters when he speaks.

This I what I did this week.  Jeremy Bleich and I did Joan and the Giant Pencil to about 90 wiggling and wonderful second graders at Cesar Chavez Elementary.  Their teacher, Reverie Escobedo, should teach the goddess class in classroom management.  She has them clapping, singing, and listening into silence in English and Spanish. 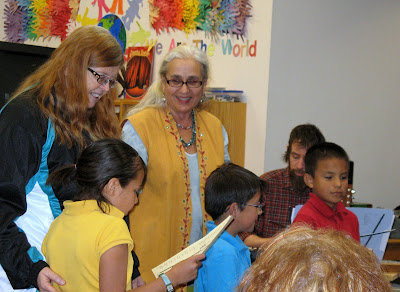 Here we are. That's Reverie, Jeremy with the beard and drums, me, and some kids reading in Spanish and playing rainsticks. 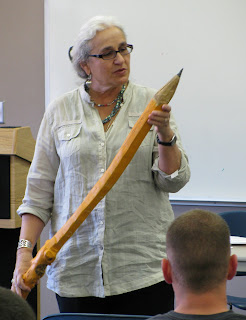 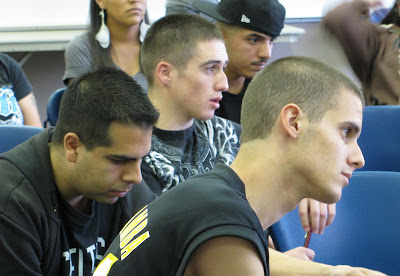 Then yesterday, in my hometown of Española, I got to spend three hours with a program called The First Year Experience Program at Northern New Mexico College.  The idea is that if people can make it through their first year of college, they are well on their way. I saw half a dozen instructors I knew and read poems, lectured at great and embarrassing lengths, and wrote with about 80 people.  Terry Mulert, one of the instructors actually said, "Would you do me a favor?  Please talk about yourself."  That was the most hysterically funny thing said to me in the two years as PL and non-stop self promotion.  And here we are:
at 6:14 AM 1 comment:

You probably know, I mean how couldn't you.  Hakim Bellamy was named the first PL of ABQ.
I got to be there and be surprised, though there was no drum roll except in my stomach, and Mayor Berry just let the sleepy cat out of the bag.  And I had been so careful not to find out.  Like not knowing the ending of a football game you had prerecorded.

But still, that didn't take away the joy at being there, getting to read, and feel the absolute right choice being made.  There they are, Levi Romero, Stewart Warren, Susan McCallister, Don McIver, Mindy Grossberg, Mayor Richard Berry, Hakim Bellamy, Me, and Valerie Martinez.  We have two SF PL's, one mayor of a growing western city, one Centennial poet since we are 100 this year as my mother would have been and the Titanic,  four poetry activists, an esteemed group.

I am noticing that I used to be tall and in the back row. Something has changed.  Thanks for noticing my green decor, I got these dynamite green jeans at St. Vinvcent de Paul.  But enough about me.

I am going to try and paste in Hakim's speech:  By gosh, I think I did it.

I rode the train home, so windy you couldn't see the Sandia Mountains, not even a smudge where they belonged.  I was just so happy and singing inside, too tired to tell the Sex in the City beautiful lawyers from Houston who worked in immigration rights and could have been my new RailRunner best friends, how happy I was.  I made it home, breezily.  I was so tired, you'd think I did something.

I want to tell Hakim, that he has already been doing the work.  I know that I just did my life to the nth power, no back burner, on steroids.  I got asked to do a lot more things, some great fun like the Santa Fe High Graduation keynote and Joan & the Giant Pencil (one tomorrow!!), and some deeply odd.  But I think I enjoyed almost every one.  I only lost my voice at the end of two.  Note to self:  Don't read at the Cooperage on graduation weekend.

But do go to Odes & Offerings and the listing of PL events at Santa Fe Arts Commission website. Don't go on Sunday or Monday as the gallery is closed as many people have been telling me.

Michael Namingha of the Arts Commish is tweeting my haiku to folks to drum up good applicants for Santa Fe's next PL.  Nobody tweets me because I just learned to text.  I have a new motto, gleaned from the work at the Community Gallery.  "Text is the new Next."  I think it's catchy.  ABQ has a motto, "On the page, on the stage."  I like it.  I like everything about it, except how short I look in the line-up.
at 11:01 AM 1 comment:

I remember the good old days when we made and delivered Valentines and I was the good PL.
Now I am on the outs with about half my friends, there is a buzz both good and bitter, and I thought I was going to have to eat my words about the SF Reporter, but they managed to have an article this week (yay!) and not mention my part in  (O & O) even though the picture they included was Bernadette Freer's process in tackling my poem, "Unpunctuated Awe" to WS Merwiin. 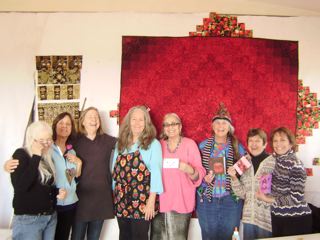 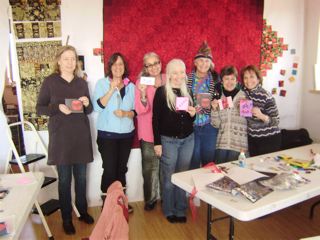 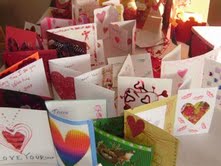 Now I am feeling like a cross between Judy Chicago on a bad day, and Grandma Moses on a good.
My sophistication and naivté at war with one another.  You see, though the art show is fabulous, the most in attendance ever at Community Gallery, and most people happy.  The poets are fuming.
It seems that though I was advised to not display the poems, and pictured people milling around, studiously, with booklets of poems in hand that they pour over, the poets wanted wall space.  I understand, honestly I do.  I would be bad-mouthing myself if I weren't me.  I would be critical in the nicest of ways, "What was Joan thinking? This PL thing has addled her, gone to her head, and forgot to post the poems."  But no, friends of mine who are miffed, we thought we were doing a good thing, and it has, indeed set up a longing for the poems, a magnetism, a conversation about art and poetry.

Forgive me my perspective, though Michael forbids me to say I am sorry. I guess that is what love is also, getting to tell a person you are not sorry.  I am, though.  I hate to roil the poetic waters, muddy the iambics, ruffle the swan feathers.  At least, I told Mike, I was not swanning around at the Opening, but handing out name tags and answering the phone from my friend Robin who was robbed.

Get people hither to the show!  Booklets are there, the air is clear and clean, you can see the work and read the poems at your leisure.  Closed Sunday and Monday. 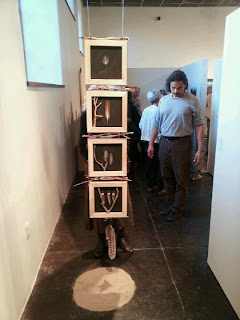 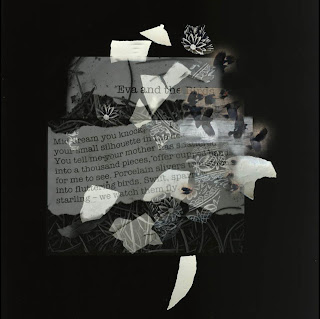