May I just come out and say it right there.  It rocked. The Opening of Odes & Offerings.  36 poets/36 artists. Some hung out to collaborate, some never met until last night, some didn't show. Though the newspapers forgot to mention it, and the catalogue of poems got ever so slightly mashed, and my friend Robin who is the reason I moved to new Mexico after I met her in 1969 in a Chicago Heights school, the Cottage Grove School to be precise, got robbed at CVS parking lot by Sunflower Market,  and my throat practically fell off from meeting and greeting folks, it still rocked.  I am so sorry Robin,  Thanks for making the effort to come to     The Opening until you got robbed. Glad you got your phone and credit cards back. These really are becoming desperate times, sort of post-Apoplectic, I mean friends are being robbed at knife point in Chimayo where before there was only break-ins while we were out. 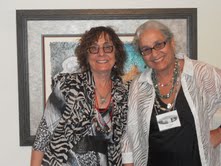 All of this is why we need acts of extreme beauty, which this show was.  Not beauty as in the surface, or my mother's Beauty Shop, but beauty as in connection, community, celebration.  I have a new thought. Just once.  On my way back from Florida  at the Dallas airport I ran into the ever gorgeous Anne Marie Garcia on her way to Costa Rica.  When her gate got changed we were scooped up by the playboy of the carts that come through and say, "Move away, a cart is coming. Beep beep beep."  Anne Marie was even making the beeping sounds.  She asked if we were supposed to be disabled to get a ride, and though I did point out I have a maybe broken toe and elevated my foot, I also realized that we were handicapped, I know that isn't a PC word, but for this purpose I need to use it.  I realized we were handicapped by Extreme Beauty. I am going to tell everyone that I am compromised in this way. Last night was a big part of it.
Tobie-who-is-here-on -Sabbatical understands.  We are both total devotees to beauty, even thought beauty has gotten a bad name of late.  I'm sorry, my mother had a beauty salon and I was dressed and educated by the money she earned in beauty, raised by beauty, answered the phone for beauty, and took out its rollers and pin curls. Last night I raised my poems to the sky to show my mother and father, right there in front of whoever was left in the Gallery After The Show.  Oh, the show.  I got a bit off track.
People seemed really happy and excited about it, mostly.  I want everybody to come back, spend some time with the poems which will be in catalogue form, look over our books of poetry.  I have to admit, I smuggled in poetry.  I have become a beauty smuggler and the artists were my accomplices. Someone who shall remain nameless even though he is the ultra handsome and cool partner of someone else who shall remain nameless, said that poetry was made accessible.  I think not having the poems easily there created a magnetism and longing for the poems.  When do we stand out in public and long for poems?
Come back, public and newspapers and people not invited or juried in.  Come back to beauty and longing and the Poetry Reading Room we set up, comeback to your own work and not being included or being included and whatever creative waves that sets up in you.  Two months, fifteen days left.  Now I get to experience my other thought, the one I had leaving Boston after college in 1969.  The ends of things are intense and you may fall in love or get a boyfriend, or have a sunset as pink and purple as my Uncle Sydney's painting of the mountains that hung in our Pittsburgh dining room.
As I left Boston, the light was bright, I had boys around me, the guy we called The Sun God because he shined with handsome and another high school boyfriend. I met the intensity of endings.  Here I am again, how to end the poem?  Emily Dickinson said it should feel as if the top of your head blew off. A bit intense for these post-Apoplectic times but I am staring to feel blown away. I want to get back to my writing, to the grandkids, to gardening.  I want to sew more PoemHolderstm and sell them so I can spoil the grandkids in a good way.  I'm a long way from a new boyfriend, but my husband is looking ultra cute in his new SHELL LUMBER cap and black shirt.  End times.  New PL times.  Who could be more appreciative than I have been to serve.  Did I mention that three or four pieces sold and I don't even get a kick-back?
Come to the show, oh ye masses, and write some reviews would you. Hold onto your purses in parking lots, invite friends to collaborate, take a Sabbatical if only a day or week, and smuggle in beauty when you can. This blog, it turns out, is my ode and offering.  Thanks TJ for setting me up in it.  I am answering the phone to beauty, and texting her handmaidens. I finally have arrived from the Back East where I set out west in 1969, with only my blue VW between me and this vast sky.
at 4:16 AM 3 comments:

I believe this is considered the Eve of the Opening for Odes & Offerings, a collaborative art event where 36 poets sent me four poems and then I worried about all the poets I didn't invite and even more about the ones who never even blew me off, just didn't respond, and the 36 artists who were juried in, not by me, but by people who didn't include a few of my best friends.  That collaboration. It is the Eve even though it isn't 6:00 AM yet and there was barely a calendar listing in The Reporter.
I am pretty sure the Reporter has it in for me, perhaps because I am over sixty and long-married and live next to my chickens.  They have never even mentioned in two years that I got to be PL and serve the city in ways visible and invisible, not once. Maybe they have an anti-poet laureate policy or had a friend they thought would have done a better job.
Maybe they got wind of what I have been saying about their Dan Savage column, that though I know from my very hip bi-sexual and tall friend that he only talks about consensual sex,  and have considered her response, still, some of the kids don't need free access to some of his topics.  I lap it up like yogurt, but only in an over sixty, long married, living next to the chickens and two turkeys sort of way. I am the grandmother of three and I occasionally feel that Dan Savage should run his column by the Thirteen Indigenous Grandmothers or the Pope.  Not that I am bitter that The Reporter featured a really interesting tattoo artist's history of the swastika, a piece about Steve Reich's "Different Trains" which is a composition I adore, and my friend Jeremy's show which I will go to, and barely a calendar listing for the 72 artists involved in this show. I want to go on record here saying that I am a big fan of tattoo art, I really am, and speak out for it at many public occasions.  But I am also a pretty huge fan of poetry, and that is why I got the idea to have it smuggled into the visual arts. Come on you art-centric city, cut us some slack.  I think perhaps I am not behaving well, representing my city. Maybe it is what happens at the end of a two year tenure, or, as a friend said, racing for the barn.
I am really just back from Florida where the highlight of the trip besides the beaches, the food, the lap pool, and perhaps breaking my little toe was Shell Lumber.  My brother took me there.  He is nine years my elder, but I sort of caught up, and since my childhood he has known what I love.  He bought me a doll with nylon stockings from his summer job money, got me my first library card, and took me to a frat party when I was nine. Now he and I are both grandparents and both love hardware stores.  The thing about Shell Lumber is that they have about three city blocks of lumber,  They have wood with names you never heard of and so they have the pronunciation right on the tag along with $11.50 per foot.  My favorite thing was the molding display which was beautiful and covered an entire wall.  I loved the shapes of it, the skinny and the fluted, and I did document on my cell phone which I don't know how to use, being over 60, rural, and married so long we each have our areas of expertise. So, try to image how beautiful this molding, only the ends mind you, is.  There is a certain old school eros in beautifully displayed lumber.
That is how I feel about poetry.  It is the non structural part of life, the part that covers over the seams, connects the wall to the floor, and is totally useless except for beauty. There are crown moldings and cornice, dentil, egg and dart, and the ever popular rope molding.  I think they correspond to poetic forms that decorate the cracks.  My brother and I delighted in the bustle of the Floridian bros,  and he bought my husband a SHELL LUMBER cap. I talked non-stop, the entire week of my visit, at the pool and at dinner, about this art show.  My brother and Carol even gave me a check to help document the event.  My friend Tobie-who-is-here-on-Sabbatical (that is her name) suggested I use the check to buy an outfit for the opening. I might swing by St. Francis de Paws thrift store and see if they have anything that is not too hardware looking.  Oh, The Reporter did mention me once when my book was voted one of the Best of Santa Fe,without me lobbying anyone to do so, a common practice.  They listed me on the un-cool side of their coolness spectrum. I kid you not, as my 9th grade teacher was wont to say.
Well, the turkeys need to be fed and I need to see what practices Dan Savage is condoning and explaining to the uninitiated this week.  The paper is feeling pretty thin.  I am sure they were just on a poetry intolerance diet, like all my friends who eat no wheat or dairy. I promise I will not sneak into town and peek through the Community Gallery windows.