Did I ever tell you about my mother?  She was a hairdresser, had a fancy beauty shop and I never could get it right by her. I went to the shop on Fridays in high-school, and every week emerged with a new do. One week a flip and the next a page boy, I was caught between Jackie Kennedy and Annette Funicello. She told me every girl would die for this opportunity. I remember tears at a haircut, fingers soaking for manicures, and meeting all the foil wrapped hair-colored ladies.

As an adult, from college on, I never set foot in a beauty salon. I wore a long braid off to the left.
After years in New Mexico, the dry wind and two kids didn't agree with my long hair.  Even though the cocktail waitress at Line Camp told me I had beautiful hair I was fed up with it.  So, I cut my long braid at about 35, got a perm and felt I was a perky mother of two. I looked at myself in shop windows and mirrors, toting a baby and dragging an exuberant toddler through the West Palm Beach airport. It was a sort of frizz, or what is now called a Jew-Fro, a term I dislike but it is descriptive.  But then I felt so au courant.

My mother met the plane and she said, "What happened to my Indian Princess?  Now you look like everyone else."  Her statement was a great gift, cultural inappropriateness aside.  I knew then I would never please her and it freed me.  I had to be my own person from that moment.

In her last days in 2001, I would fly in every two months, first Florida and then Pittsburgh. She was of good cheer and adorable. Her hair white, for the first time after a lifetime of prize-winning blond coloring, and fuzzy like an easter chick.  I even got Julian who used to work for her to come to the house for her last hair cut.  My mom looked ecstatic, and Julian was honored to do the honors.  I should add, that sometime in those final months she let slip that my brother was always her favorite, but that somehow I was winning some points now. I sat at her feet embroidering roses onto pillowcases.

A few months later was her last day.  The helper, part of her round the clock care, quoted my mom as I was not there.  "Pack your bags sweetie, we're going to Florida."  And she went.  That was 12 years ago today.
It's her yarzheit, the anniversary of a death.  I don't have the official candle but I have plenty of votives.

Here's to Beti, queen of beauty and the first who taught me I had to go my own way and please myself. 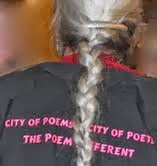 She did and was also able to be generous and light up a room.  I have my hair in a braid once again, white hair at that. I don't know if she would like it. I do know I asked her how she could stand all her friends dying around her.  She said, "Every morning I thank God I am alive." She played golf when her sister Pearl died because she wasn't strong enough to go to California. She was a club champ into her eighties and died at 88, "ver ner 89" as my dad would have said for almost.  I think my hair would have ver ner pleased her.