Dates for Letting the Poems Out 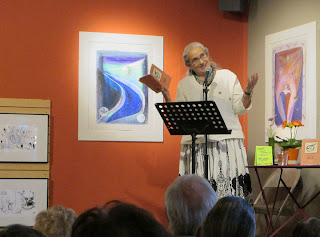 May 28th – Poetry at Paul’s with Joan, Sita Jamison and Jeremy Bleich.

Back in the Poetic Saddle

The official beginning of everything 2011 is here. Let me start with a poem from student Hallie Burton
of Julie Hasted's poetry class this fall at Santa Fe High. In this class we talked about whether poetry came from the outer world or the inner world.  Then we went on to talk about what is outer and what is inner.  Amazingly, nobody mentioned the natural world in this discussion, so Julie and I had to throw that one into the mix.  With her permission one of the many outstanding poets:
Living Who I've Been
I've lived as flowers
Roses, Daisies, Lilies
I've raised my petals to the sun
And soaked up its nutrients
But with no mouth,
I couldn't taste it.
I've been every color imaginable
From the palest white,
To the darkest black.
But with no eyes
I couldn't see them.
I've been a woman's perfume,
A man's cologne,
An herbal garden,
I made these scents
But with no nose
I couldn't smell them.
I've lived with my roots firmly in the ground
Holding me lovingly
Standing me tall
But with no will of my own
I'm no one at all.
By Hallie Burton
I think the question of will is the big one for New Years. The outer world helps me so much with will
as I am asked to do things, or I ask if I may, and then I find my will is amazing and on task. Dreams also get my attention and in winter as I hibernate, they kick in as fuel for the writing.  Left to my own devices, I am the poster child for breaking resolutions, so I tend not to resolve.  Luckily my love of poetry and of passing it along to others of all ages is beyond discipline and into delight.  The kind of will and discipline I have is the disciple variety, I'm on an irresistible path.  So, back in the saddle, ready to write.  If I still had a horse, I'd ride too.
at 11:45 AM No comments:

Email ThisBlogThis!Share to TwitterShare to FacebookShare to Pinterest
Labels: poetry in community

Living deeply in one place for a long time suits me.  For us, 37 years in northern New Mexico, always rural, always wood heat, always  mailboxes with a red flag, and always poetry.  We have gone to the same Christmas Eve Party for 34 years with a few off when the hosts grew busy and weary.  New Year's Day breakfast at Sue's in Chimayo, I don't know, at least 30 years.  I like seeing people who know me, all of us growing older and sweeter.

At the New Year's day party, Elaine said there are Matachine Dances in El Rancho, starting within the half hour. I have always wanted to see the El Rancho dances, a dance that came up from Mexico, mysterious, symbolic, and with violin, and guitars.  These are the only dances done by both the Indigineous people along the Rio Grande, and the Hispanos.

I jumped in my car and pulled into El Rancho at 2:05.  There were about ten masked dancers (danzantes) in ribbon, crowns, fringes, bandana masks, the Malinche in white, and the abuelos with the mask and the whip.   In the chair for a throne sat the monarch, representing Montezuma. A week before I had been at Turtle Dances at Okay Owingeh and the whip and mask were familiar. The one abuelo was both serious and in the role of the clown, by turns describing the history of matachine's 400 years in El Rancho, and thanking the elders who revived it, Pablo Roybal for one.  Then he would say, "Remember that night in El Rancho?" wagging his tongue at a woman.  Or he would hump a woman in a chair to the hilarity of the crowd who knew them both. Or after the dance of the toritio or little bull, when the Abuelo wrestled him to the ground and symbloically castrated him,  he offered the dangling pouch (one can only imagine what it is) to the women in the crowd.

I felt as if I were there, witnessing this 400 year deep dance, for my friend Nicole.  She is an informal scholar of Matachine, also a dance historian and critic. She now lives in New Jersey.   It's odd, but unless Nicole is around  I prefer going to dances alone.  I can get close, although almost ended up dancing with the more anonymous Abuelo, his hat bristling with straw.  I got the feeling that most people knew one another from church or neghborhood.  One woman reassured me, "Don't worry, he won't hurt you" when the outrageous Abuelo came close.

All the while the young Malinche, a regal girl about age 12, danced with dignity in her white communion dress and little heels. Her classical face could have come from a photograph hung inside of the neihboring adobes.  The hour passes and maybe seven dances were performed.  The dance of the cross celebrated that everyone was Christian now,  the Abuelo explained with what I almost feel is innocence. I am not a Christian,  a radical nd risky statement in America, I figure the only one in that crowd. But nobody is asking me to convert on the spot, or die.  That we are a mile or so from San Ildefonso pueblo is ever in my mind.

The Abuelo welcomes the newcomers to the Valley.  I know I am one.  He says that newcomers are part of the story or soul of the valley, something like that.  I am so in the relaxed moment, warm sun in the 23 degree air. The dances I can sink into without criticism.  That's not true.  As the Abuelo danced around, surprising gracefully for a white haired long haired man, he kept saying, A-OO-ha, like the marine maybe he is.  The crowd responded, A-OO-ha.  I wasn't wild about this ongoing call. But maybe the clash of cultures is what this dance brings home.

I leave and go visit my grandkids, driving down to the first place we arrived in that April, 1973.
My kids and grandkids are natives of this place.  Just driving down to see them, my riches. I feel that as I age here, the snow on the moutains which I have seen come and go 37 times, is mine. And these dances are not separate from me.
at 9:16 AM 1 comment: