A guy just tightrope walked over Niagara Falls.  They made him use a safety line cause they didn't want him to plunge to his death on a major TV network, not even cable. Poets usually work without a net, and we don't even need one cause we're usually sitting down.  But these two women definitely have saved the day.

I once went to Aspen since I had won, against all odds, a National Endowment.  The wonderful and cranky poet who happens to share my hometown, Jerry Stern, taught me a lot.  But we had also sent manuscripts and I sent him my messed up poems to help me sort them out.  Little did I know that everyone else brings the cream, it's Aspen after all.  He hemmed and hawed, asked me what I was willing to sacrifice, and told me I had "sort of a voice."  I was devastated, after all I had just won an NEA and the next stop was a Pulitzer for sure.  So I wandered the streets of Aspen, bought nail polish,  weeping.  I happened to run into Joy Harjo in the grocery store, she was teaching also, and I told her my tale.  She offered to meet for dinner, and we did, hours later, she toting her saxophone which she was learning to play.  Her kindness was the safety net for that two week event.

Listen to her on KUNM radio on Saturday, Women's Focus, July 21, 2012 at noon with the ever wonderful Carol Boss.  If you miss it on Saturday it is streamed for two weeks. Joy is also reading at Collected Works at 6:00 on Sunday July 22. She reads from her memoir, Crazy Brave and what a perfect title.  It makes me feel a little braver, as she did in Aspen.

Then, as if life isn't good enough, today I had cheese enchiladas with Carol Cellucci, my amazing writing teacher from the 1980's.  In her class I met so many dear friends, Judyth Hill, Katherine Shelton, Jonelle Maison, Janet Holmes, Sarah Kuth, and David Treeson to name a few. And we all learned so much about poetry.

We had a near three hour lunch event, poetry history being made as we ate. This is another sweet example of weaving the loose threads back in, not quite the safety net at Niagara Falls, but a necessary delicate net of connection. I wrote two poems for her and gave her the PoemHolders.   We shot poetry ideas back and caught up on everybody we knew and some we didn't remember.

So, the moral of this story is, Listen to KUNM and Joy Harjo, write your memoir and don't forget me, get in touch with the old dears from you past and make them a non-funcional pot-holder. 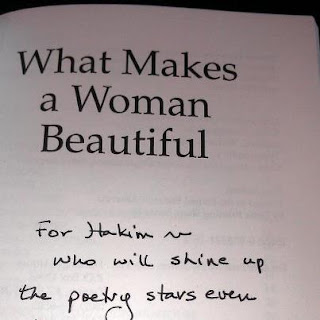 The only thing I can download is this, from my Poets Laureate Mixer with Hakim Bellamy, the new ABQ PL and very urban hip. He will shine the poetry stars even shinier is what I said.

I wish I could show you how great Carol Cellucci looks after all these lapsed  years.  Trust me,
she's beautiful.
at 3:22 PM No comments:

Amazing and the Amazon

I may have mentioned a few dozen times that my very husband is on the very Amazon right now, as we virtually speak. I am caught between being proud and telling people in a show off way and thinking WTF, here I am at home perfectly happy and is he the crazy or sane one.  I mean, it's complex.
Since he left I have done a few things. In no particular order.

1. Yesterday I removed cactus thorns from a Western box turtle's face.
I used tweezers and why he didn't pull his head in was a good question.

2. I have watered and kept things alive. This sounds short but takes long.

3. I hugged the major the first time since Joan Logghe Day. He was wearing
a white suit.

4. I watched, with my son, daughter-in-law, and grandkid the procession of 150 folk artists from 54 countries.

5.  I went to a movie with my grandson called Brave.  It was sort of a girl movie but
enough stupid violence to keep him entertained.

6. I got my third pedicure from the Vietnamese poet. That too is complex.

7. I heard Willa Roberts sing Baltic folk songs twice and was as proud as if she
were my own kid.  She did say once that Elaine and I were second mothers.
My first memory has her on a quilt we made, lying on her back, grooving to the music at Laurie's belly dance class. It was love at first sight. Her voice is stunning and she lives in New York.

8. I have sewn at least fifty PoemHolders, made a postcard about them, and been very happy with my new Japanese fabrics.

9. Started a poetry class with a dozen students. It filled so fast I never sent out a call. They are wonderful.

10. Got in touch with the minister who married Mike and me at the "Church of What's Happening Baby" as my brother calls it, or The Glide Memorial Methodist. I found him after seeing the exhibit at the Folk Art, Gamon, art from the Japanese Internment camps.  It brought tears to my eyes and I thought of Lloyd Wake who lived in such a place, Marion, his wife and colleague of mine in 1971, did too. They are alive and in a retirement community in San Francisco. I sent him Twenty Years in Bed (though it has been Forty) and a Poem Holder made especially.

12. I wrote an obituary for Gary Eckard and a poem for Dion, two deaths of the near and dear, and two songs still looking for tunes.

13. Now they have announced Jon Davis of IAIA, Mazel Tov to him.  Please ask me something besides how I am doing as emeritus kicks in, cause I really don't know.

That's plenty.  I feel as if there is nothing to do now that I am Post PL. Oh, I did hear from my high school and then again college boyfriend. He dumped me FIRST, and then I dumped him. We've been sweetly back in touch a little.  I like the internet for it brought me Lloyd Wake, my old boyfriend, my college roommate, and it settles arguments I would be having if Mike were not on the AMAZON! 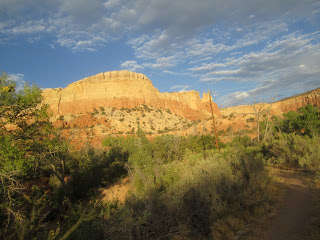