My daughter, Corina, and I just spent a weekend in the Convention Center selling our wares for Recycle Santa Fe sponsored by Keep Santa Fe Beautiful.  You know I have been keeping it by writing down the beauty when it crosses my path.  The weekend was beautiful and it kept me hopping.

Corina made leather items from scrap leather and I had my PoemHolders. 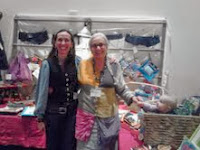 We had fun, visited with dozens if not a hundred friends, and sold some goods. We have  lived here 40 plus years and Corina there for all but one of them, so life is a party.

It was pretty cool to have people stand and read my poems for long periods of time. Some people got what I was doing, others just came away smiling but perplexed.  I recycled perplexity.
I also recycled, repurposed, retyped poetry.  I had mostly my own poems, a few Emily Dickinson and William Blake crept in and a Stafford and Sherman Alexie.  They couldn't help themselves.  I recycled public domain and copyright infringement.

And family.  At one point  Corina and I, the baby, Kaleia, big girl Kaylee and Tammy, my wonderful daughter-in-law, and Leland and Hope were clogging the flow.  Nobody could get near the booth and I totally didn't care. For about an hour the glorious recycled genes of family and Lineage, which is what Corina calls her business. We recycled like the joke : What is the only thing Unitarians agree on???  Recycling. 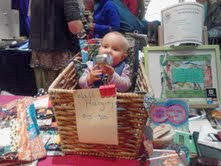 joy.
The PoemHolders hold the poems with the breath of inspiration, as Allen Ginsberg would have said, and the joy of sewing together colors and recycled fabric, every piece with a back-story only I know.  I left with many scraps from my late friend, Leslie Pierpont, gone many years but her family are movers and shakers behind Recycle Santa Fe, and now her fabric scraps live in my house and we Recycle. She baby sat Hope when Hope was the exact age of Kaleia and Corina and I even made a pre-Hope doll in her doll making workshop at the Waldorf School in 1985.  What goes around comes back to grab me. We gave her grandkids a hug and they are amazing. They love Corina.  They look like they own the place.  Thanks to Keep Santa Fe Beautiful.....Recycle Santa Fe is another holiday in our religion.
at 11:35 AM No comments:

I was flipping the waffle iron with its gluten free non-dairy waffles, and my daughter had the baby in tow since her husband was hunting elk, and then there was the houseguest my husband found and brought home.  This was also the week of the fourth storm, washing out the arroyo and the truckloads of gravel he had shoveled onto the road.  It all felt very tenuous and not like we were 66 and 68, but like the old days.  I didn't even mention that a bear got 17 of the chickens my daughter and their housemates were raising, carefully and on organic grain from Dixon.  I hope the bear appreciated their organic status. And the good news, the kids sold the yurt.

About halfway through the waffle flipping, the iron itself 100 years old and cast iron, I felt it.
"I feel just like a hippie."  My daughter laughed but no one else saw anything vaguely humorous.
We made the theme for the day National Hippie Day and kept ourselves amused and our minds off the snow up north that the elk hunters were certainly braving.

We made granola. Now, I used to make bread, yogurt, and granola on a weekly basis, but I hadn't made any since probably 1978.  I don't have the documentation, though I still have the recipes.  I can tell you how to make carob brownies, Ellen's apple cake, Angel's Chow Mein, and Kahlua. I can let you know all the names we considered for our first child in 1974, from Anna to Sophia Claire to Zachary. I have the guitar chords to "He's got the whole world in his hands' and "Michael Finnegan."
I have miniature patterns for ethic fashion and directions for corn husk dolls all in a tiny red notebook.

The funny thing is, my life has not changed all that much. We live in the house we designed and began building in 1976.  I cook less, but I still heat with wood, recycle, drive a bad road, have babies showing up unexpectedly, not to mention stray houseguests and dogs.  I live in New Mexico, not back east and these occurrences are normal. I wrote a poem this week  called "Things I didn't tell my brother" when he calls and asks how we are.  It depends if you are asking according to Back East standards and Eastern Standard Time or New Mexico, where the mountains and time zones are Rocky.

Let's ask the kids. Who has health insurance, raise your hand?  Who froze chile?  Who is secure in their housing arrangement and has mortgage in hand?  Who has enough firewood?  Who got an elk?

On National Hippie Day we not only made granola, my daughter made me ghee and printed out its benefits which I didn't want to tell her I used to know myself in 1970.  We took a walk during which, while carrying the baby in a front pack she took off shoes, thus leaving bare footprints on the La Puebla road.  We found out that the three weird dome shaped structures that came over-night are meant to be a meditation center.  I don't know if anyone mentioned to the owner that they are right next to the Rio Grande Sportsman's Club where the sounds of guns popping fills the air, and which may have targets aimed in their direction.

The houseguest didn't spend a second night, he was told in meditation to go back to Phoenix.  He left before dinner which is hard on a Jewish mother/hippie/poet.  He asked if he could shower before leaving. I said, of course.  Now our shower is in the greenhouse. It is very tropical and what many people enjoy about our house.  He emerged minutes later and I said, "That was a very quick shower."
He said is was just an "aura cleansing."

I have no imagination.  I couldn't make my life up. Does anybody need a very large dog?
Happy National Hippie Day.  Hope to see you next year.  Bring maple syrup.

A few days earlier. Halloween at the mall.  I am masquerading as a regular person.