A Density of Synchronicity 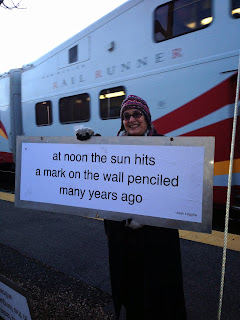 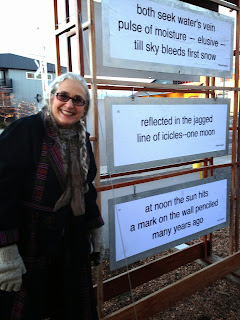 Thanks to Axle Contemporary for this wonderful project.  I think my post is still up for one more week, if you want to catch the poetic linked excitement of it. And there are still weeks and weeks of renga, until summer.

I know you have been wondering, what sun-kissed synchronicities have befallen me. So many I almost have to skip a clutch of them, as they do come in groups.  I will begin.

My son-in-law is applying to grad school, a PHD program in psychology at Duquesne University.  The program has a depth psychology and a specific professor with a Jungian bent. It is in my home town of Pittsburgh.  We all feel my mother is getting back at me for moving west and raising the grand kids in the wilds.

My own youngest, the delicious nine month old Kaleia, was on a holiday journey to her dad's family in sub-zero Indiana. Her other grandpa, Charlie, who has just come back from Peace Corp in Rwanda, had a hankering for a VW camper van, you know the type. He found one which had lived in Santa Fe (!) and was now in Pittsburgh (!!).   Charlie told the VW seller that his son was applying to grad school, and guess what? One of the seller's best friends is head of the Psychology department and the aforementioned professor (!!!). 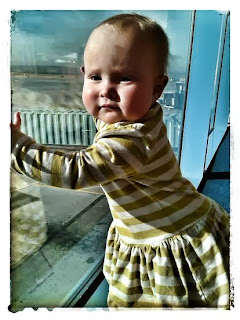 Kaleia, Hope, Charlie, and Leland drove from Indianapolis to Pittsburgh and got to buy the van and meet the professor, who respects synchronicity.  I am taking a deep breath, and saying "Roots and wings, we give them roots and wings" at the distinct possibility that our enviable all-in-one place family becomes like most of American, only FaceTime and two air flights away.

I stood in a parking lot telling a young man this story, as he was a Duquesne University graduate.
"I was born on Jung's birthday. July 26th," the guy said. (!!!!) Of course he'd love to meet them if they come to Pittsburgh where he still lives. Thanks Luke.  I am keeping a file of Pittsburgh connections.

Telling our pals Pat & Melinda this story, Pat kept saying "Tracks, tracks."  What she explained she meant was a teaching of Carlos Castaneda who they had studies with.   The tracks of your destiny, when life lines up like this.  You gotta respect it. You gotta wonder why I am so resistant and attached.  Dense, is all I can say.

The latest excuse for not writing is the holidays.  So when a little poem snuck out on New Year's morning, I felt like it was an excellent omen for the year.  In the spirit of my brief poems:

Substitute the words “far-out” and “mellow”
for every adjective. Then cool.
That’s how it was in 1973, forty years ago
and we were just a sparkle
in New Mexico’s eyes.

Then the years of “awesome,”
a persistent moniker
and lately “Really?”
in a sweet surprised voice
that lilts upwards, especially
near my grandchild.

The words may change, 2003,
the year bling hit the Oxford English.
But today itself is mellow and far out,
awesome and full of bling,
bling, and bling.

I knew this was a mere skeletal approach to my topic.  How I react to word fads.
I am sure Shakespeare and I have this one thing in common.  He did not resist the
new words of his faire tongue, and I do not either.  I sometimes can't stand them, and react like a person with a rash.  But I do hear them, take note, and sometimes slip them into
writing.

I took my little note pad out at Sue Farrington's famous  Chimayo New Year's Day Party, I'd guess I have attended over 30 times. Thanks Sue. I asked the youngest folks in the room if they had anything to say about word fads.  They said I'd asked the right people, Willa and Jerry, two musicians back form New York, late thirties.   When I told them my love/hate reaction to words we became instant "besties" and here are some we added.

"Groovy" would go in with the Seventies and is one I love.
"Totally," "radical" or "rad," and "whatever" may slide into the Awesome generation.

Meanwhile, Johnny is alongside and suggests "Bitchin'."  I tell him I will not accept that,
for it is very Beach Boys, too west coast (though I lived there a year)  and not in my language surfing experience.

I think of "righteous" and Jerry suggests "wicked" which I feel is mostly Massachusetts where I did live for four years.  So I accept it reluctantly.  Johnny again said, "bitchin'" and I again say I never used that word and do not intend to, the female dog and negativity about women aside, it isn't something I have crossed paths with verbally.  Now that the word "Bitch" is used both humorously, lovingly I guess, and in rap music non-stop, I am especially sensitive.  Poison oak of language.

But I digress, I am still jotting like crazy, Robin says "neat " was up in the Fifties, in Los Alamos, and of course "Cool."  I know people and a particular summer camp my kids went to where the only adjective on stock is "cool."  Cool this and cool that. I liked what the camp had to offer except this one stop adjective.

"Epic," "Gnarly, " and "No way... Way" cropped up in the discussion, and I added "No doubt." It even became the name of a band.  "Obtuse" was suggested and then Dave Best chimed in with "colloquial familiarism" as what I was looking for.  The man looked like he could coin words like a slot machine could spin.

"Not"  and "Word" occupy a ring of Dante' Hell. The "F Bomb" cropped up at my Ghost Ranch Class since the conference center is owned by Presbyterians and the college students respected my request for appropriate language. Not to censor but to attune.
Again Johnny insists, "Bitchin', bitchin.'"  He gets his wife in on the act and says, "It we saw something we liked in a store, we'd say 'bitchin' right?"

"In high school," she didn't seem to like the word any more than I did.  "I"ll put it in my writing"
I told Johnny to make him happy.  He is a rad, gnarly sort of guy, a great skier and only missed surfing by a quirk of geography, being an Albuquerque kid.  He does water ski.
Maybe it's a jock word, not a poet word.  Now "jock," there's a visual word for you.

I have been trying to add a new word and see if it takes off.  Today was really "dense."
That is so totally "dense."  I see it as a positive like "ill" and "sick" have come to be.
Dave again, "That has mass."  I swear he is a word factory.

My dear poet, Gerald Stern, when I took his class, spoke of his verbal prejudices, or maybe I made up that terms, anyhow, words he could not stand in a poem.  "Compel" and "ponder," that kind of thing.  In my verboten list I have "unique" which sometimes leads to "very unique." You probably could add your own word allergies.

But for today.  May your New Year be sunny and dense.