My  now four year old grand daughter Kaleia told me one late night avoiding bedtime,  that she was perked up, she illustrated with thumbs up.  She wasn't perked down, her two thumbs pointed the reverse. This has been my months long effort.  My friend Sharon taught me one can control one's attitude.  I am trying.

Today is sunny, not yet windy, the dishwasher humming, the birds fed, the hummingbirds on schedule.  We have 20 baby chicks and two baby turkeys in the greenhouse. Yesterday we went to Earth Day at Northern New Mexico and as we sat through talks on solar building, we nodded to one another.  We had done almost everything right.  Of course, there's room to improve but this lecture sure helped me perk 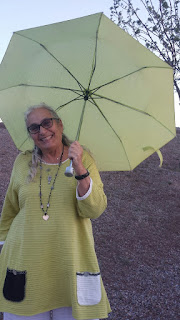 My friend Julie Bennett took this Singing in the Rain photo after writing class at Pueblo of Pojoaque Library.  It's right by the Wellness Center where I swim and which locals call "The Wellness."  I am perked up after I swim.  My inspiration and role models are Osh who told me he's 85 and sometimes swims a mile.  He does a leisurely back stroke, all the time in the world. He dresses well and is cheerful.  He is living a perked up life.   I like also Helente who is in that age range.  Sometimes she arrives with her lanky Australian friend in his Speedo.  I want one of those guys to help me perk up when I am in my Eighties. I notice all the folks older than I am who are perked up.

I always felt perked up after a visit to Barbara and Alvaro.  Life was worth living and the Truchas immoveable feast they provided uplifted and inspired many. I bet many feel that he was a very close friend, as he had the gift of attention and heart.  Today I go to Alvaro's memorial   It has been hard to grieve enough for how I deeply feel at this loss. He died in August at 89.  Our last talks were that he wanted to do a ZEN service and make a Japanese garden at the grave of Jade Bird, our beloved birth and death grand daughter.  He's the one who told me, "Short is short, long is long, each life is complete."  I recalled those words in the Children's Hospital during the most baffling and dire of times. I think we wrote it over her crib. There were moments of perking up even then and this Alvaro teaching which he passed on from his own Zen teacher did help.

He twice insisted he would do a Zen Ceremony and the kids said, "Say yes , Moma.  How can you say no to that offer?"  Even though I knew he was in no way up to his generous nature and impulses, I said yes. He wrote to apologize he would be unable, as his own son died.

When Alvarao died, a few months after this generous offer, my grief hollows had been stretched so big by loss, his death fit inside the emptiness.  I was spared the dreaded response I knew I would have. I could handle it.  I dread losing Robert Bly, Gerald Stern, Gioia Timpanelli, these dear stars and my own personal best friends, too, I will lose.   Alvaro was a true Zen teacher, living so presently and elegantly, and knowing death was always right there, in those Truchas views, in the books that he wrote, in the music that would sound and then disappear, in the paintings he made.  He was living between the eternal and the ephemeral.  He was one of the best men, to me, I ever knew.   He's alive as long as I am, according to my rabbi. His own work will live on, of that I am convinced.  He was so focused to finish his translations of Diego Rivers's interviews by his brother.  He completed that important project which now has found a publisher.

Today I am perked up to drive to Truchas and remember Alvaro. 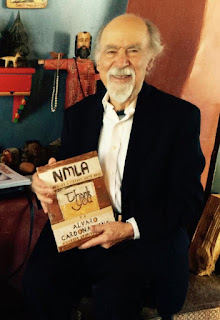 "The beekeeper kissed me,
the kiss it tasted like honey."

translated form Spring Has Come:
Spanish Lyrical Poetry from the Songbooks of the Renaissance
at 11:01 AM 5 comments: