Wednesday I read at the Community Gallery surrounded by works of art by children.  I called it my Post-Poet Laureate reading and read from the many poems I wrote way back then. Okay, I promised to not have a post-post-poet laureate reading, but I can't promise I won't read from the poems again as they are leaning towards a book.  I need to get one of those purity rings to keep poetically chaste or maybe three rings like a notebook.

The three best things people said to me during my tenure (I love to say tenure for the obvious reason that I will never have another) are this:

1. "I am so proud of you. Don't lose a bit of it."  My grand daughter Kaylee at age four the night I  passed the pencil and took my oath of office on the Santa Fe Plaza. I swear she was channeling my mother or at very least my Aunt Chutey or Pearl.

3. "Didn't you used to be somebody?"  Carolyn Riman, after the final jot had been jotted,  on Lincoln Avenue.

I had a very nice evening Wednesday, revisiting my post, and everybody seemed happy with Odes & Offerings, the book Sunstone Press published of my final project of visual art inspired by 36 poems by 36 poets. People were so sweet.  I forgot that people were so much sweeter than my obsessing and Woody Allenesque mind.  Besides my black belt in worry, I am skilled in worse case scenario.  Open the doors and see all the people. 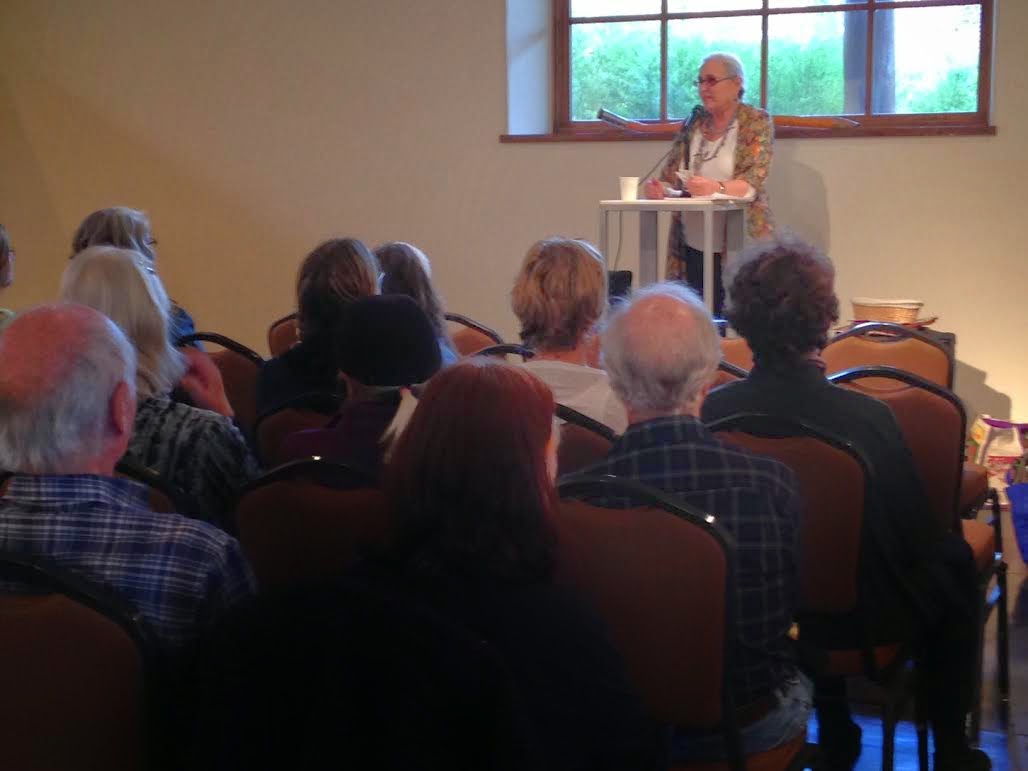 I think most of them came for the door prizes which were five poem holders and a few little books.   We had a distinguished visit by street poet Chuck Calabreze and later a cameo appearance by Jon Davis, current Santa Fe P.L.  My grand daughter was there hooting a bit and it was her first reading at age one year and I think, by her clapping and hollering, that it was a hit. The sushi afterwards wasn't bad either.

Now I am back home and trying to do less sewing and viewing and more writing, or moving poems around on the computer since there are so many wastrel poems in here.  I send post-Good Friday love to you all. Thanks if you came to hear me read, and thanks if you are reading this, and just plain old thanks.

I am busy teaching little Kaleia one year old things like "Block," "bird," and "what does the owl say?"

My Braid and I

My braid and I are happy it is poetry month. 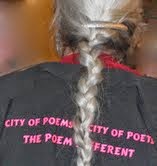 Already I have written two intros to books, forgotten to write something about Espanola, and have a keynote to write for the Santa Fe Girls' School Gala.  I went to a gala last Saturday.  It was filled with writers and for literacy. People keep asking me about my writing.  Everywhere I go people ask me, "So, Are you writing?"  I am not writing a poem much, or sewing a poem holder though I sold six yesterday, Yay team, and not in my blog so much.  My not writing is taking up all my writing time.  I have to keep up with my "shows," see my friends, fit in as many chile rellenos as one can in a lifetime, and admire my jonquils and hyacinths before the wind takes them. I have to be there for the grandkids.

Last night it frosted.  My windshield and the lawn were white. The beautiful three peach trees seem to be still holding their blossoms, but maybe it is a last ditch effort before they turn black and shrivel. Spring in New Mexico is full of heartbreak.  I know. I have been here forty-one years, one week from today is our New Mexico anniversary. So I called my old land lady and invited her to lunch.

We arrived on April 11, 1973.   This was before there was poetry month and before I had poetry credentials.  I wrote, was class poet, and won a Academy of American poets college poetry award in 1966 of all years. I was a freshman.  But in 1973 I was married, had survived a few months driving a school bus in Fox Chapel, a year in Chiacgo teaching Kindergarten, a year in San Francisco, and two long sub zero winters in rural Wisconsin on my husband's family dairy farm.

New Mexico looked like paradise. We landed in Pojoaque which we pronounced as you would expect two greenhorns to pronounce it, and stayed with Robin and Jim, Barb and Syd.   Barb remembers me walking around naked. I remember her soaking pinto beans and baby Jessica crawling around my ankles. Michael and I drove the dirt roads looking for a place to rent.  We considered ruins of adobes with no windows.  Hey, after two Wisconsin winters how bad could it be?  We stopped at Al's Pharmacy and Al told us of a house up the road a mile.

When we got there and I knocked, I noticed the succulents by the door, a good sign as I love succulent plants. The woman who opened the door had the most beautiful open smile. Beatific.  It was Virginia. We were to become neighbors for 3 1/2 years. Now I haven't seen her for about six, but I just called her on the phone to ask if she will celebrate with me.

I think living there is the luckiest thing that happened in a pretty lucky life, knock wood. The three room adobe was a classic and Nora and Roland Pickens had lived there.  They restored it as Roland, may he rest in peace, designed exhibits at the museums. I have written this again and again, but there I was painting the house a fresh coat and all three doors to the three rooms open tot he road. The people streamed by on the Nambé Road and I thought New Mexico rich with walking.  It was Good Friday, April 19th, 1973. These were actually pilgrims walking to the Santuario de Chimayo.

Forty-one years later, our son is married to Tammy Garcia Logghe, from the family who owned the Pojoaque place where we first landed.   These braided lives come out of a state with a sparse population. It is just right for me. I was a pilgrim and a stranger.  I live in that beatific smile
more than my back east frown.  We drove the road this week to see if we could see Angel, Ana, and Joe walking, these new New Yorkers in our life.  We drove our pilgrimage, but still, cruising is a sort of prayer here, and you and me, babe, keep on trucking.