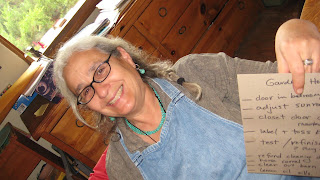 I am just about ready to give up on never giving up. It is the Dalai Lama I have to blame.
I always quote him when asked to give graduation speeches (three times to be honest and all three include this quote) and it seems to have made sense at the time.

So this spring when I have been mumbling about giving up with my garden it is the Dalai Lama in the wings who is telling me to cowboy up and persist. I remember once before, in 1998, when I managed to grow cucumbers despite the rabbits. No such luck this year. The Dalai Lama has cost me at least a hundred dollars in bedding plants. And more if you count plant accoutrements, which I should but don't.

It is so dry this year that the wild sunflowers, asters, and mullein haven't even bothered. Good news is that there are hardly any weeds except where I water. Bad news is the rabbits have noticed this and subsequently waged war on my garden, a garden that looks like Guantanamo. It has anti-rabbit fences, and the raised beds have straw bales which seemed high enough to discourage predation but now the rabbits just hop on. I noticed they didn't like snapdragons so in my flower beds I planted them, and marigolds. Nobody would eat marigolds though the zinnias were a risk, and the cosmos, and the echinacea. By morning, $23.17 worth of bedding plants gone. The snapdragons lingered, and apparently are an acquired taste as now they too are mere sticks. Nary a snappish little face to delight the grand kids. I am blue. And, in keeping, they are after my soon-to-be-son-in-law's blue corn as well.

So my dear problem solving husband and I shuttle off to Home Depot. We buy 25 feet of fence (only $23.95) to keep out small rodents. We encircle the three garden beds with said fence. I see the rabbit on his hind legs, but only able to eat potato leaves though the wire mesh. Aren't they poisonous? Success, I am so bold to think. And, piece de resistance, Michael installs a sproingy spring on the garden gate to I will not forget and give Peter Rabbit his way.

Now I neglected to mention the lettuce plants. I bought plants along with the seeds I sowed. The rabbits got them once, but with diligence and water they came back and I had five lovely heads shaping up, careful to pick a few outer leaves to spruce up the store bought Romaine. This morning, one full day into Plan C, the lettuce is decimated and all I have left is this wonderful phrase. The lettuce is decimated. Maybe my next book will be called Decimated Lettuce so it isn't a total loss. The truth is the rabbits are the ones who never give up.

I have gone to about seven plants store, and today have brought home one Japanese eggplant to coddle and spoil in a pot. It is a lovely purplish plant and I console myself that it works as an ornamental if it doesn't fruit. I also have four small eggplant in the garden to replace the four small eggplants I had in the garden who were flexing their muscular leaves and in fine fettle until Flopsy, Mopsy, and Cottontail got wind that eggplant was good for cholesterol or rabbit prostates. So, I am down to the potatoes which have always hated New Mexico and are one of Michael's nostalgic Wisconsin aberration (along with a few others, don't tell him I said so) and tomatoes. The rabbits have begun to like tomatoes, but I am feeding them the yellow pear variety which are lovely, but more a luxury than a necessity.

I don't want to be a hypocrite and give up, but the truth is I am a renowned giver-upper. My best friends know this about me, just take me to yoga and you will too. I forgot to mention I tried hot pepper spray, coyote urine, and am about to check out male human hair. My husband is going to buzz his today and I read on-line that it works. A shotgun or a little rabbit feeding station with fresh water and rabbit sushi could be in the works. These are the redneck (and effective) and then the experimental and compassionate approaches.

Today it occurred to me I could take French lessons to soothe my failure and buy everything from the wonderful Farmers' Markets around the state. The farmers need to eat too, not just the rabbits. I know some of you would say, eat the Rabbits. But, we had a bout with our cats and Rabbit Fever in 1999 and I don't even want to tell you about that one, Dalai Lama.
at 8:31 AM 2 comments:

Here's what's next on my Living La Vida Local

It has been one year since I got bit by the Poet Laureate Bug, and a fine year in so many ways.
I am in gratitude for this chance to shine up my silver jewelry and swan around Santa Fe until my friends can barely see me for the glow of words, ego, sunset, kids' eyes glinting with poetry,the reverb of poetry in the cottonwoods, the smoke alas the smoke, the prayers for rain heading up into the clouds if only the clouds could hear, and gratitude all around. I do feel a bit transparent with my experimental happiness.

What I love about Santa Fe and staying put in northern New Mexico for 38 years is that almost every place I go I am at home and I see a friend. I ran into Gary Brower and Kenneth Gurney at the Range in Bernalillo a ways back. Maybe they were conspiring to create their two fine literary magazines, Malpais and Adobe Walls. Michael Namingha is everywhere, the quintessential man about town and I am always happy to see him. Sunny Smyth is selling glimmering glass on the Plaza. Camilla Trujillo is in the Española Pool and then Spanish Market, and today my Lamaze teacher from 1974 recognizes me at the same pool. When I go out I sometimes wonder, what angels will I meet today. Anyhow, local is us this season and here's my latest calendar for summer and>>>>>>>>>>

July 14, Santa Fe Children’s Museum, Celebrating the Art of Poetry, 1:00-5:00 PM, bookmaking, writing poems, haiku AND “Joan and the Giant Pencil” with original composition by Jeremy Bleich on trash can lid, guitar, toy instuments, and poetry 2:00, all welcome by museum admission. Though it is a show for kids, I think any poet friend would love it. I love the poems and the music so much. 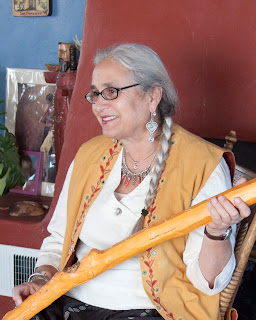