Reading Paul Auster's Red Notebooks for the third time I think we should collect people's best coincidences.  I love and treasure mine and am going to give you a few that come to mind. I remember that when I was in high school and we read Charles Dickens, the question of coincidence came up, and I seem to recall that some of his plot turned on unlikely occurrences. As young women we didn't find it plausible, and Ms. Hickman, our wild and wonderful English teacher concurred.  As adults I find them not only plausible, but essential.


Frances and I flipped a coin on whether to have sensible oatmeal with walnuts or go out.  When staying home for breakfast won the coin toss we decided to tempt chance and go out. So as we were having breakfast at Flying Star in Albuquerque before I was taking the train home, in the middle of our always engaging conversation, the phone rang.  It wasn't the best of manners, but I answered and Judy Goldberg invited me to a birthday party for that very night. Judy Goldberg's husband has been a friend of ours for almost 40 years. No way was I going to go home to La Puebla and come back to Santa Fe. On the train, having dragged up to the top level for the view, I called Mike to tell him about our friend's presumably 70th birthday.  As I am leaving a message I Iook up and the man's son is two seats away, coming as a surprise from Portland.  He's on the phone too, and tells his mom, "Joan Logghe's on the train talking about my dad."  His mom says, "Welcome to New Mexico."  Then there was someone I knew across the aisle.  And when I went to the bathroom, the door didn't open, occupado.  When it opens a second later it is an old student of mine who looks at me and not missing a beat says, "I was waiting for you."  I could not remember any of the three names, but Forest, for that was the son's name, came and sat by me and we talked deeply the whole ride home, even as we passed the geese and sandhill cranes in the farmer's field.  I went home, got Mike some clean clothes and we met up for the party.  I was one of the few who spoke and any last minute feeling I had about the party dissolved in the sweetness of the beautiful event.

By the way, the woman in the bathroom, whose name still escapes me, gave me my first persimmon,
her hair the color of persimmons, so though I just recalled she is Sally, I think I will call her Persimmon.
The other woman across the aisle, whose name I have forgotten twenty times is Adela, pronounced in Spanish. She is always sweet when she reminds me of her beautiful name. Adela.  She is coming from a film editing job in ABQ and was the student of TJ, the very friend who set up this very blog.

2.   It had been a difficult and amazing week at Hollyhock, the retreat center on Cortez Island, near Campbell River in British Columbia.  My fellow teacher told me right away I wouldn't be invited back, since we only attracted ten students.  I felt sad,as if I was being booted out of paradise, then thought of all my friends living with AIDS and the line of Linda Gregg, "I am filled with all things seen for the last time."  I decided to live my life more  the way my dying friends did.

Then there was the Queen of England on the neighboring island. They set up a telescope to see her and we went over in kayaks with an opera singer to a little rocky place to sing "God Save the Queen."  I had a wicked crush on a large carpenter who got it and told me he was celibate and that he and his wife found it worked best that way.  And one of my students gave me a Jewish name, Jocheved and I think had a little crush on me.  I thought I taught well, I was content. The Book of Miracles sat on the shelf in my little room and I didn't even have to open it.  One afternoon a women talked to me about grace.

On the final day of the week I was preparing to leave Hollyhock and Cortez, and tying up the loose threads.  I wanted to give a gift of milagros to my favorite staff member, a woman named Eve Marie who sang folk music divinely.  I told her that here people make such deep eye contact, and that in New Mexico it was not culturally proper, at least among the native people.  We said our goodbyes, eye contact and all.  She walked off, her arms full of towels for the laundry. As I waked into the lodge,
I saw a card from my House of Cards, the childhood deck by Charles Eames that I had given my students to write from.  When I turned the card over the image I met was a pair of eyes, a carved mask but only the eyes.  My heart flipped.  I walked outside for a breath of air and several deer were waiting, their large eyes fixed on me.  The coincidence knocked me into a holy dimension for days.  I said to the deer, "Thank you" and there was an answer, "You're welcome."

3. I came back from Hollyhock pretty wide open, knowing I had to be careful.  As I was driving a red car sped past me with vanity plates,  2EVL4U.   I told my husband, my daughter, the experience.
And soon upon my return we found out the BLM (Bureau of Land Management) land behind out house, 10,000 acres, was slated for oil exploration.  They would level three three-acre plots and drill sample wells, bring in roads 20 feet wide to accommodate the trucks driving in near the town cemetery.
We walked into the land with a few neighbors and it became clear we had to fight Giant Oil, the 100 year lease holders.  One land owner had wind of the possibility for years and had an environmental lawyer, Grove Burnett, lined up.  Also, the Sierra Club was present as we gathered the community, united that we didn't want our lands destroyed. You should see the formations they were going to cut a road through.  I somehow led the meetings, as the wife of a fireman in the La Puebla Fire Station.  We needed letters to the BLM and when the community said, we aren't writers, I answered, "But I teach writing!"  We met for a letter writing session and the BLM got over 100 letters from a little traditional community at the top of Santa Fe County.  We were in the paper. My phone rang and rang, my husband watched as he headed off to work. We got a letter from Mr Tedford of the Museum of Natural History in New York pointing out the archeological value of the site.  There are the bones of prehistoric mammals and giant turtles here. Whew, it was intense and I was in the middle of it.  I fell totally in love with my home of over twenty years and my neighbors.

They backed off.  Giant Oil went away. We all were amazed.  I was exhausted, pulling up to a store for groceries. I thought, we didn't do this ourselves, all those Guadalupe candles I lit, and other friends prayed to the Virgin of Guadalupe. She helped us, I thought.  When I opened my car door I saw a small wristwatch lying on the asphalt.  When I picked it up and turned it over, there was the Virgin of Guadalupe. Time stopped. I have it still, I can show you. 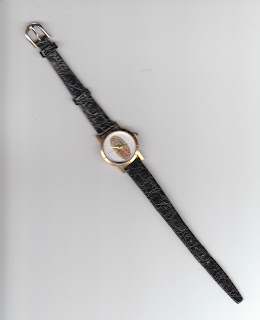 What are your coincidences.  joanlogghe@gmail.com since messages don't seem to work on this blog.
at 9:28 AM 1 comment:

So much blogable in this life and do I even bother?  I am extremely busy being recycled.  My daughter is pregnant and so my genes are having a party inside her.  She has a site that sends her vegetal graphics of how big the baby is.  We have been through lentil, blueberry, grape, kumquat (when do we think of kumquats?), fig, something, something, and now we are mango.  I can't recall if avocado comes before or we are on our way to avocado.  You understand, I am doing nothing but thanking God I am old and not pregnant and praying gently.  Her husband is off on an elk hunt and they have moved from the yurt to the wilds of far off Española.  I find out the house is one where my friend Camilla Trujillo lived until age 13.  I want to rush right over and check for the lines on the doorframe that charted Camilla and her siblings. My Pittsburgh friend visiting has no sympathy as his three grandsons are in Kenya.

But besides being a totally codependent mother of the pregnant daughter, I literally recycled and sold at Recycle Santa Fe.  Here is what I was up to for the last year.  I didn't keep records but I am sure I have topped 200 of these Poemholders.  I make two almost daily, and for the show in 100% recycled fabrics. 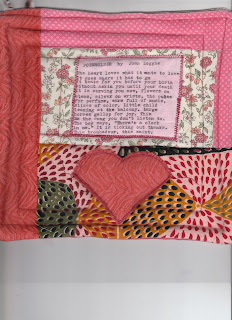 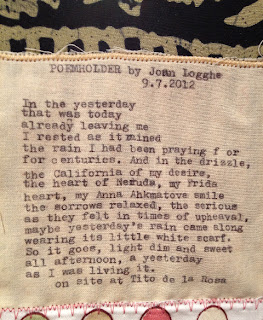 My other daughter made wrist cuffs and cool belts, sort of like a half miniskirt, out of leather scraps.  We had a great time, sold a lot, and I bragged that I wasn't even tired.  Then I did go into total fatigue days later and have been milking the time change, going to bed before dinner. The time change is great.  I am recycling time.  I use it and then use it again, and then I still have some hours I can use.  Right now I found the time to do this blog when there are chickens still on daylight savings time waiting to be fed.  Get a watch, I tell the roosters.

But really this is how to recycle a poet laureate when the laurels (nobody bothered to wreathe me in) fade.  I have no idea how I am doing but I have a clue. I weathered the Mayor's Award dinner and was happy to talk with current PL Jon Davis and hear him read. Then a few days later Carolyn came up to me on Lincoln near Marcy, mere blocks from city hall, and said, "Didn't you used to be somebody?"
It was the best thing anybody had said to me. It made me laugh at how true it was. I always start Joan and the Giant Pencil readings with, "I'm nobody, who are you? Are you nobody too?"  Emily knows how I am feeling without even leaving Amherst or even being alive. 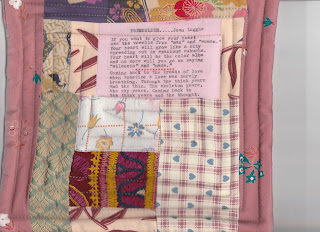 When my metamorphosis is complete into Nobody, or I am transmogrified as Emily likes to say, I will let you know.  Until then I am watching my daughter beautify in pregnancy, waiting to taste the elk from the hunt,  sewing Poemholders, and pretending that Nobody is what I always wanted to be.  I think I will go recycle some kitchen scraps into egg production and send you lots of hand-me-down second-hand love.
at 8:25 AM 1 comment: