Well, I found a note I jotted, since I am a great believer and practitioner of jotting.  My Polish neighbor did not say, "This is my lucky moment" as I reported in my last entry. What he said as I emerged from the greenhouse shower, scantily clad (I'm almost 66) in a towel was, "I am a lucky moment!"  Much better.  So, I bring you two moments since we last met.

I went to Pittsburgh to see family and after much fussing about how best to be in Albuquerque at 5:30 AM I decided to wake up at 3:15 and head down.  I did a great job of driving, had my boarding pass ready for an early seating on Southwest, and was in plenty of time for breakfast.  I waited for the 6:00 doors to open, made a hasty order, and waited, and waited, and almost left, but instead was served food which I inhaled, or just shoveled unattractively in.  When I got to my gate there was no one there, but he waved me through clucking that they board a half hour ahead of time.  At the back of the plane, with an aisle seat for my long legs, was a seat and a young woman with a pleasant face.  It gets better, don't stop now. This woman, Pauletta, was going to Pittsburgh to study wetlands.  How sweet is that and besides, she was native, she just was.

We made it to Houston where the plane stopped and let on a lively crew.  There were some lovely young women and when I rose to let one into our middle seat, she said don't get up and climbed over me.

With my conversational skills within one minute I found out that this 16 year old was Jewish, coming from being a camp counselor, lived in Squirrel Hill in Pittsburgh (also called the ghetto), and was a member of Chabad.  Chabad is an orthodox and very traditional group out of Crown Point, NY who I think of as wanting to convert all of us not so good Jews.  There were all were on and 3 hour and 20 minute flight, a marginal Jew married to a very non-Jew, a Chabad teen, and as it turns out, a Diné.

Our teen is named Chana Ester but everyone calls her Chester and the camp kids called her "Chest."
I ask her many questions.  It turns out I know some members of her community, as my mom's golf friends, the Rudolf twins or Edsel and Diesel as we called them, have eleven grandkids in Pittsburgh's Chabad.  Chabad is everywhere, in Taos, Santa Fe, they get around. Chester is the youngest of nine.
I ask about arranged marriage, school, modern influences. She goes to Yeshiva Girls, will have a matchmaker Though you do not have to accept the match they research background, do blood work, etc. She has never talked to a boy as a friend. They don't talk to boys or touch. Touch is for marriage.
I asked her how many drop out and we talked about the Amish and their tradition.  Meanwhile, Pauletta is leaning in and I am explaining as we go. I ask about wigs, and being around bad influences like me.

The two of them then dive into a Marie Claire magazine and giggle at all the skinny models.
I decide that this is one of the great moments of being.  A Diné woman trying to recall her Navajo language to a Hebrew speaking Chabad girl.  I felt between worlds, living out here for 40 years and a Pittsburgher all along.  I said to them, "This is a great thing.  Both of you come from beautiful cultures that are trying to keep them alive."

Chester loaned me her earbuds so I could hear my music, and they were passing the magazine back to the other girls in her pod, and I asked her anything I could think of.  I told her I was exploring coincidence in my blog.  I jotted but can't find what she said.  Something along the lines of it being a holy moment, that Hashem (the Holy One) had it planned all along.  This moment, here, she said, was planned.  I said, "You mean it was Beshert?"  She gives me a little nod, that I know this yiddish word for it is meant to be, it is planned.  I told her to tell her mother that she is a great spokeswoman for Chabad, lively and open, and reverent.  I am madly in love with my two seat mates, hugs goodbye.

I am a lucky moment.  Dear Letta and Chester.  That was the fastest three hours ever.

And this is the lucky moment I wasn't.

I called home every night and asked Michael if the Night Blooming Cereus was going to bloom.
Every night he said no, and that he had invited various neighbors and friends to see when it did.   Each blossom from this very homely plant is about five inches across, smells lovely, and has a little universe inside.  I always think it is my version of going to the opera, or that it is the opera of plants.  There is a yellow stage and hundreds in the audience, all lined up in white and yellow rows.

He kept saying, "No, not tonight."  He decided to stay an extra night to see me and maybe catch the plant blooming.  This year there was a record eight blossoms, all ready to go on the same night, just a few precious hours of viewing.  The night I got home, I asked, "Are they going to bloom" and again he said no.

I was so fatigued from travel without my two blessed seat mates, a trip where I barely talked to anyone, that I headed right to bed around 8 PM.  I did not even think to check the greenhouse, not even when I was woken with a leg cramp at 1:30. Hello, Joanie, my calf was saying. 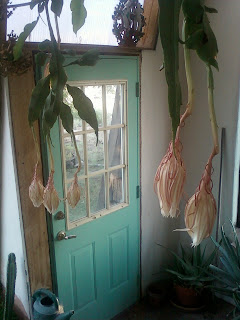 Only the next morning did I check and see that we had missed the opera.  I  felt slightly sick at heart, but did not want to go into blaming myself, or Mike.  Instead I wondered if a night blooming cereus blooms in the night with no one to watch it, is there still beauty?  I decided the eight blossoms were having a party all by themselves, as it was beshert, meant to me.

The photos from the internet show what we missed, and this larger one is the morning after, all hung over.  I e-mailed the invitees so they wouldn't be losing sleep in anticipation.  Mike took off for Telluride and the Mushroom Festival.  I ate Bolitas mushrooms with my eggs, courtesy of my own kids.  Those ones who are thinking of moving to Pittsburgh for a Phd program.  I would love to know what Hashem has in mind.  What has been planned.  What is already woven, and what will blossom.

Yesterday I was emerging from our greenhouse shower and I hear my name being called, "Joanie, Joanie" and with a strong Polish accent.  I grab a towel and it is our neighbor, Andres.  I tell him I am not dressed and he smiles at me, "It is my lucky moment."  It's not a creepy moment, just me in a towel and this man my age with a large dog on a leash outside the house. We are both laughing.  Nobody has ever caught me in dishabille and it doesn't embarrass either of us.  I get Michael who also thinks it is funny.

I am just back from a week at Ghost Ranch with my grandson.  I have three days and then I am off to Pittsburgh so see my dwindling family, my brother and wife, my niece and great niece.  Ghost Ranch in summer, and lots of walking from our room down at Corral Block which I have always called Cell Block.  I liked it.  The Milky Way was showing off. The other folks sharing the communal bath were all very sweet.  Galen tooled back  and forth on his bike and practiced hanging out with kids all day.  I was the writing part of Hiking, Writing, and Yoga for Women.  The women were amazing, strong, uncomplaining, game.

One woman, seeing someone in line thought she looked a lot like a girl she used to go to school with at Miss Hutchinson's School for Girls, in Mississippi.  When Ashley saw the name tag, it was Cassie.  Now these women had not seen each other in 26 years and were in our group.  That was amazing, but Dona, our fearless, leader, just attributed it to Ghost Ranch.  The next day I felt a poem in my pocket.  Robert Frost's "Nothing Gold Can Stay." I was trying to memorize it.

Randomly, of all the poems I brought with me and my limited time with them, I read it to the group of women.  I didn't know it at the time, but Cassie and Ashley were doing inward somersaults.  That was their class graduation poem. 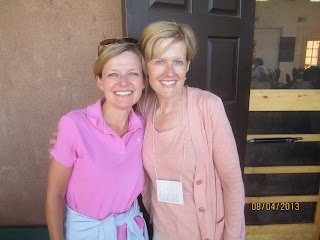 We discussed coincidence, which may be after all just random chance and statistically usual.  I asked painter and poet, Cynthia West, what she thinks.  Her take is that at a place like Ghost Ranch, which really has wild beauty and power, the veils between world is thinner.  These things are always happening, but we notice them here.
Nothing Gold Can Stay

Nature's first green is gold,
Her hardest hue to hold.
Her early leaf's a flower;
But only so an hour.
Then leaf subsides to leaf,
So Eden sank to grief,
So dawn goes down to day
Nothing gold can stay.
Robert Frost

Ashley and I were walking down the hill.  She works at United Way as a publicist and likes it, but also shared that she really likes small grass roots foundations that grow, lets say, out of a mother for her son.  A few hours later I speak with C. S.  Merrill, who has lost a son. She goes into the library and shows me the press release.  She has started a peace foundation in his honor.  I give some suggestions, and relay to Ashley who spends an hour on publicity for fund raising.  Issa Merrill Sakaki Peace Foundation. Now, excuse me.  But this is an odd amount of random for a few days if you ask me. 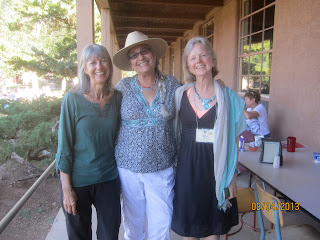 Here we are, Susan Weber, Yoga teacher extraordinaire and Ghost Ranch Wellness coordinator, Dona Bolding, the fourth in the country spring board diver for her age group, and me in the middle, happy to be there in my lucky moment.  I realized I have spent so much time at Ghost Ranch it is like my body.
I am intimate with this place, going there since the 1980's and offering workshops over 23 years.   I was there 28 years ago when I learned I was pregnant with Hope.  I had crushes there, marital  crises while teaching there,  and got to be with my own teachers, Robert Bly and Gioia Timpanelli.  People I loved a lot have now passed on.  I felt my own mortality mixed in with the permanence of cliff face.
If I didn't realize the deep connection before, I do now.   Nothing gold can stay, and the last light on Kitchen Mesa  seems to have memorized that poem and is giving its interpretive rendering. 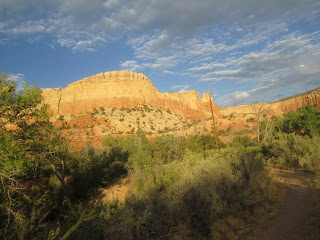