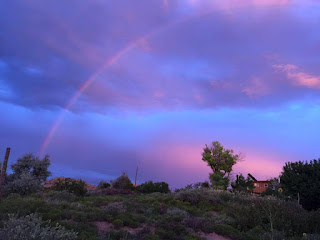 My daughter Hope sent out a photo of a rainbow over our house.  This is not an uncommon sight, as we live where the rain meets the sunlight, but this photo by our dear Carol Neukirk came at a time, out of summer season, but still in grief season.   It is the first Yahrzeit of our baby Jade Bird's life and death on April 1-5.
I posted this on Facebook, always with my doubts about bumming people out in this already fraught world.  But when I heard back from 83 people,with many amazing comments, my second guessing calmed down.  You should see how quiet I have been, in blog, real time, and poetry world.

My old friend Ellen Schmidt spoke about playing on all the 88 keys, we don't just tinkle along merrily in the right hand of it, but submerge in the left handed bass, all the octaves of emotion. I think of the most famous koan of one hand clapping.  I think of the right hand not knowing what the left hand is doing  Maybe if we embrace the darkness and light, we don't get into the politics of denial and separation, we'd have a better chance.

I also recommend to myself to be kind and open hearted to I and Thou, to not second guess so much and just move.  I have all along been saying I am not writing, and doing nothing.  I open my computer, sigh, close it.  But little by little and since only October when my childhood friend Darry and his wife Tricia, the poet of the Urban Wild,  set up my new computer, I have been entering scraps of writing about Jade, and my own reaction to her absolute purity and infinite loss.  When I printed them up, with no thought of good or bad, there were pages and pages.  The miracle of my own perception of nothing being indeed something.   Was Jade nothing, or a being of intense beauty and a gift beyond our understanding.

In one of the writings I call her a female savior.  My husband says she came to break open out hearts and reiterates all the blessings she brought. He has not been the same, and in a good way I think.  Sita Jameson, singer of kirtan and sacred chant said that Jade did more in her brief life than many people ever do,  At nine months, Hope and Leland came back here to New Mexico, their fourth visit from their Pittsburgh home to their heart home.  Their friend  would lead a ceremony.  People in their community of friends had planted corn in the spring in honor of Jade, a special white corn used in Mayan ceremonies of birth and death.   To even see the corn they harvested was a miracle.  Noble, large white ears of corn, scraggly little cooked ones four inches long.  Hope, my daughter and mother of two daughters now, one on earth and one in the spirit world, said the sight of the corn is something she never expected.   It was a great beauty.

Our right hands did know what the left hands were doing. It was many hands for two days, shucking, roasting, grinding, preparing.  This little spirit was so honored in her brevity, so present and so alive in us.  At one time I stood full of gratitude for her and knew I would not be the same without her coming and going.  Still I sobbed deeply when her story was told.  The left and right hand together make corn grow and fire catch and prayer fly.  I have felt almost mute, but today was moved to write, thanks to the Facebook "Likes" and responses of friends on this crazy internet world in this crazy life and time of it.  Men and women too, both hands. Yes and No, the duality and just us sitting around today with plum tree in bloom, and the flowers we planted a year ago for Jade's burial, blooming again.

Traditionally everyone would fly in for an unveiling, within the year after a death, to see the head stone and say Kaddish.  The cousins, the aunts, they all traditonally gathered to weep a little more and then eat.

We have a beautiful headstone, which I will keep private for now, and the poems I wrote will be my unveiling for my daughter and family.  There was a time last summer when I  was so weepy I thought should wear a veil.  I read in a grief book that once, for six months to a year  women did wear veils to show they were in mourning. I felt as if I had a virtual veil. I too wanted a warning sign that it was not business as usual. I wanted people to stop asking, "Are you writing?" Then, weeks later, floaters descended over my left eye, and days later, my right. I had an interior or somatic veil and could not see well for 6-7 weeks.  I am grateful that gradually, during my own trip to Pittsburgh, my eyes cleared.  So now I see, gratefully, in stereo.  I write to all of you,  unveiled. 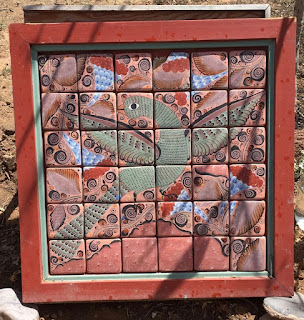 A tile of a jade bird Hope found in Mike's workshop,
another of the minor miracles which reassure us.