Falling in Love with Pittsburgh

This is what I want you to know.   I left Pittsburgh in 1965 and went to college.  I left again in 1969 after the Woodstock summer after college.  My mother kept asking me when would I return and I silently said, "Never." They sold he house, they would have gladly given me. I always visit.
Then my father died, then my mother.  That was long ago.  My brother got a bad diagnosis there four years ago. Then my daughter, Hope, moved to Pittsburgh while her husband, Leland, is in grad school there.  Having them move away was a blow.
Then I fell in love with Pittsburgh and it's where i want to be when not here.
I was already crying, when my grand daughter was born there and died, in a four day beauty flash.
My heart is speaking Yiddish.  I am falling in love with so many people there I could at least
imagine living there.  The midwives, the woman at Farmer's Market, the grandma at Blue Slide Park from Russia. My brother is falling in love with my children, and our third grandchild, Luca.
My great niece, Lauren, and I already fell in love. She named me Amazing Tante Joan.
This is what I want you to know.  My brother was Bar Mitzvah at Tree of Life.  In those days Rodef Shalom did not have Bar or Bat Mitzvahs.  They joined Tree of Life Synagogue, though it was on Craft Avenue, same as the Pittsburgh Playhouse. I went to Rodef Shalom, not far.  My little grand daughter went to pre-school there and my mother's perfume still in the halls.
I was, during all this, a Jew. Even though,  Even though we were taught not to let it show so much outside the house.  I couldn't blame them for teaching this, with Anne Frank in every diary written by every little Jewish girl.  She was the back story of out lives more than Hitler. He was behind the back story.
So now this.  eleven people gunned down on Wilkins Avenue, the street where we lived from my birth to age three. I remember the Bar Mitzvah, just a scene in the new house, and the woman with the blue tattoo on her wrist. I helped take her coat. I have a selective memory, don't you.
What I want you to know is nobody says, "A good Jew" as they easily say "A good Christian."
We say a mensch, which means a human being.  My grand daughter now goes to a Jewish Day School and got a mensch card for her good deed. How do we carry these children forward? 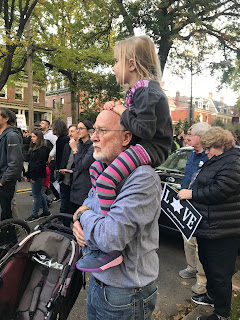 Her school and home are one mile down Shady Ave.  One mile as the crow flies.
I almost said bullet.  I almost said, the Jews could be mistaken for crows, with our
black garments for mourning.  This is what I want you to know, my grand girl carried by her other Grandpa, Charlie, who happened to be there for all of this.  I thank him, the sweetest of men who went to Rwanda for Peace Corps retirement.  We are so lucky to have each other.  He was with us for Passover too, and when baby Jade on life support,  he held her little hand all night for several nights.
My mother watches over Pittsburgh.  We are so lucky to have threaded the needle of Holocaust and made it here.  Sadly the eleven elders are gone.
The youngest one not old enough, the oldest, 97, still too young. A minyan, ten needed to say mourner's Kaddish.   Eleven died.  The singers sing, "we will build this world from love."
A man videoed the march and I watched in twice. One if us can't stop crying. One of us is numb.
At a Bar Mitzvah, age 13, the boy becomes a man and is morally responsible for his choices. My childhood friend said her son, not raised Jewish but Jewish by birth, made his own Bar Mitzvah by hiking alone in the woods.
At least, tag very least, I am finally writing something, numb as I feel. Obsessed as I cam. In love, deeply and very, in love.